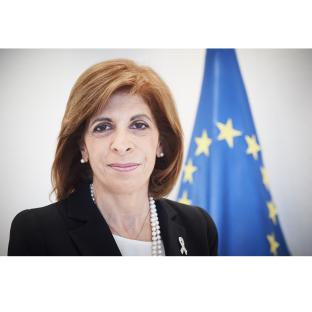 Stella Kyriakides has been Commissioner for health and food safety since 1 December 2019. Prior to that, she was elected to the House of Representatives of the Republic of Cyprus in 2006, 2011 and 2016. She was the Chair of the committee on human rights and equal opportunities for men and women and she served as President of the Parliamentary Assembly of the Council of Europe (PACE), after being appointed Head of the Cyprus Delegation to the PACE in 2012.
A passionate advocate of cancer patient rights, she was a founding member of the first breast cancer advocacy organisation in Cyprus, Europa Donna Cyprus, where she served as president from 2000 to 2015. She was also president of the European Breast Cancer Coalition Europa Donna between 2004 and 2006. Kyriakides worked as a clinical psychologist in the mental health services of the Ministry of Health of the Republic of Cyprus from 1979 to 2006. She holds degrees in psychology from Reading University and Manchester University in the United Kingdom.