The 31st Alzheimer Europe Conference (#31AEC) “Resilience in dementia: Moving beyond the COVID-19 pandemic” was held from 29 November to 1 December 2021. Over 650 participants from 38 countries attended the event, which was Alzheimer Europe’s second virtual conference. On the agenda were almost 300 presenters (160 oral presentations, 137 quick oral presentations and 35 poster presentations), who shared their research, projects and experiences in an atmosphere of collaboration and solidarity.

Conference co-hosts Kim Coppes from Live Online Events and Jean Georges, Executive Director of Alzheimer Europe welcomed the delegates from the conference studio in Utrecht, Netherlands, which was their base throughout the event. 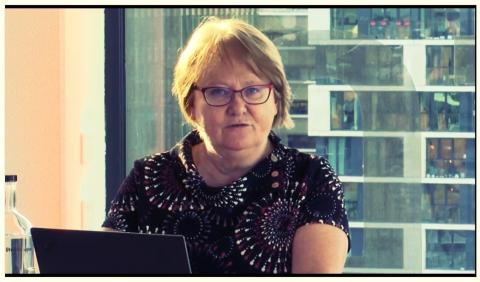 Iva Holmerová, Chairperson of Alzheimer Europe, officially opened the conference and extended a special welcome to the 37 people with dementia who were among the delegates, as well as their supporters. “As Chairperson of Alzheimer Europe, I have truly been in awe at how the European dementia community has risen to the challenge of the pandemic and identified new and innovative ways to support, care and conduct research”, she said. 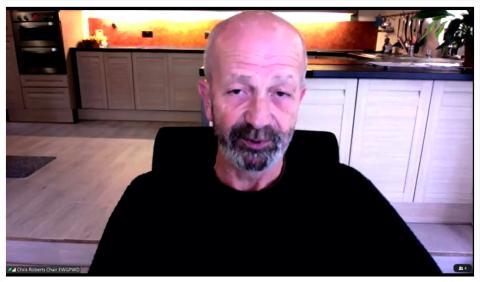 Following these opening words, delegates were also welcomed by Chris Roberts, Chairperson of the European Working Group of People with Dementia (EWGPWD) and Marjolein de Vugt, Chairperson-elect of the INTERDEM network, followed by a video message from Hans Kluge, WHO Regional Director for Europe. Chris Roberts addressed delegates from his perspective as a person living with dementia and as the Chairperson of the EWGPWD. He welcomed everyone to the conference and reflected on the importance of the EWGPWD and on how the group brings together people from different countries, giving an international voice to those living with dementia. “Nothing About Us Without All of Us”, he reminded delegates, insisting that we all need to work together to promote a better quality of life for those affected by dementia and to help reduce the population’s risk of getting dementia. “We are doing our best to live with dementia, not dying from it”, he said and stressed that with support and understanding, people living with dementia can all live better lives. 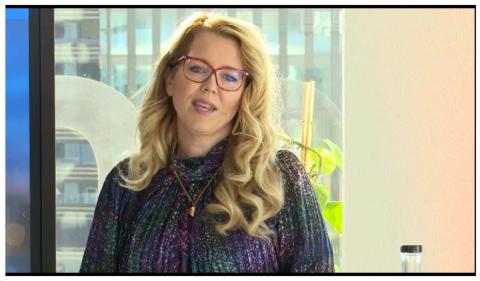 Marjolein de Vugt spoke on behalf of INTERDEM (Early detection and timely INTERvention in DEMentia). She highlighted that current circumstances challenge us; our resilience; our creativity and more than ever require our commitment to care. “Alzheimer Europe strengthens the voices of people with dementia not only to influence practice and policy but also to influence research. INTERDEM has reaped the benefits of this, for example by working closely with the European Working Group of People with Dementia in several research projects”, she stated. Young researchers are our future and the INTERDEM Academy fosters their talent and supports them in their pathway to senior positions in the field. The combined INTERDEM meeting and Alzheimer Europe Conference are a fantastic opportunity for them to present their work and to build their networks. 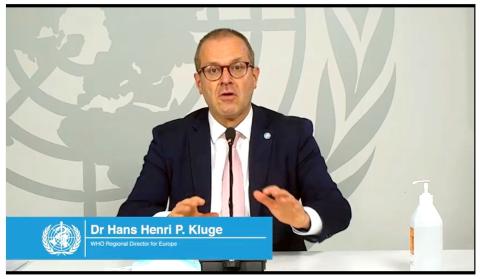 In a pre-recorded video message to conference delegates, the WHO Regional Director for Europe Hans Kluge highlighted that dementia was the “leading cause of dependency and disability among older people in the WHO European region” and that WHO/Europe was therefore happy to have worked closely with Alzheimer Europe and other European partners on the implementation of the Global Action Plan on the public health response to dementia (2017-2025). 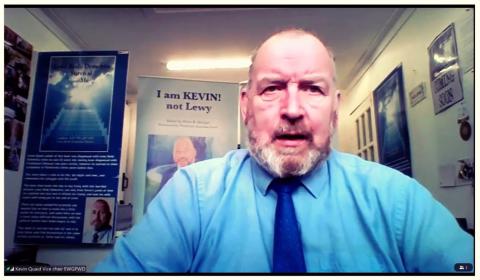 The opening ceremony was followed by a short plenary session in which the first of two keynote presentations was delivered. It focused on resilience and adapting to the COVID-19 pandemic as a dementia advocate and was given by Kevin Quaid, Vice-chairperson of the EWGPWD, who addressed the people with dementia in the audience. He emphasised the importance of making sure to have a specific diagnosis. “To be told that you ‘have dementia’ or have ‘a touch of dementia’ is not a proper diagnosis” he said. He also stressed the need to make sure that whatever medication a person is on, it is suitable for their particular type of dementia. “A wrong diagnosis can lead to wrong medication”, he pointed out. Overall, his message to people with dementia everywhere was to “Try and keep a positive mental attitude and try and keep your brain active. That is exactly why I am doing as well as I am after eight years with Lewy Body Dementia.” 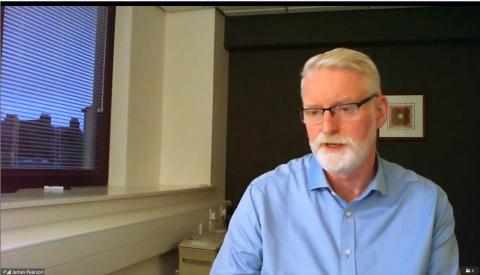 The second plenary of the conference, which took place on the morning of 30 November, was on “Lessons from the COVID-19 pandemic” and opened with a presentation on “Reinventing counselling and home support during the pandemic”, given by Jim Pearson, Director of Policy and Practice, Alzheimer Scotland and Board member and Honorary Secretary of Alzheimer Europe. 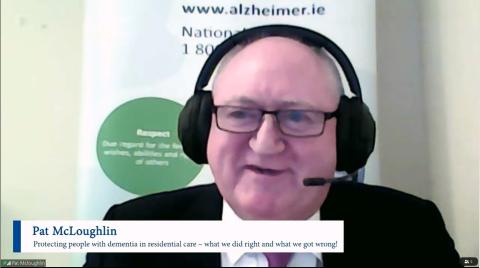 The next presentation was on “Protecting people with dementia in residential care – what we did right and what we got wrong!”, and was delivered by Pat McLoughlin, CEO, The Alzheimer Society of Ireland. (ASI). 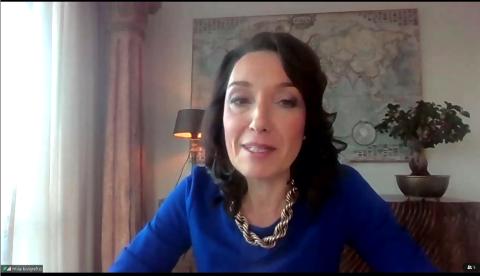 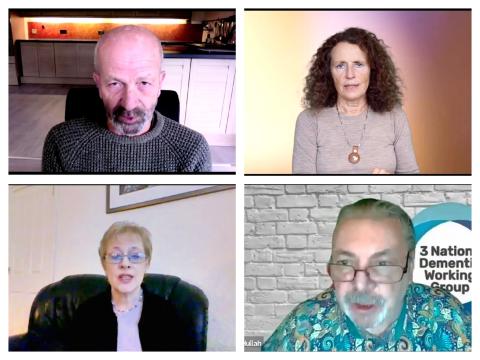 One of the highlights of the second day of the virtual Alzheimer Europe Conference was a special symposium organised by the European Working Group of People with Dementia (EWGPWD). Three members of the group made videos for the symposium: Margaret McCallion from Scotland, Nigel Hullah from England and Erla Jόnsdόttir from Iceland who was accompanied by her husband and supporter and Emil Emilsson. The three speakers shared their views about resilience as part of living with dementia and also shared their experiences of living and coping with dementia during the pandemic, and how it affected them.

The third plenary of the conference explored “Innovations in dementia diagnosis and care through new technologies”. Martin Traber, Global Medical Lead Alzheimer’s Disease, Roche, opened with a presentation on the importance of flexible care settings and home care management in clinical trials within a rapidly changing COVID-19 environment. 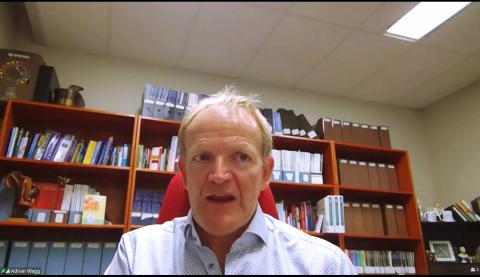 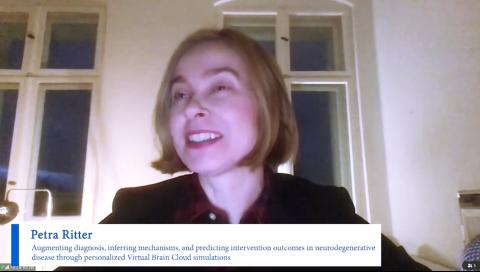 The third presentation of this plenary session was given by Petra Ritter, Johanna Quandt Professor for Brain Simulation at the Berlin Institute of Health, Charité University Medicine Berlin, Germany. She presented on “Augmenting diagnosis, inferring mechanisms, and predicting intervention outcomes in neurodegenerative disease through personalized Virtual Brain Cloud simulations”. 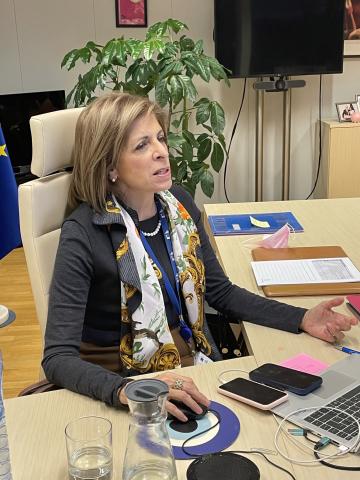 Following this, an address was given to the delegates by Stella Kyriakides, European Commissioner for Health and Food Safety. “To effectively meet the needs of dementia patients, we must first understand them. It is vital to reach out to them, their families as well as to informal carers, who make an incredible contribution to our communities every day”, she said. “We are constantly learning about the human brain. Through its Framework Programmes for Research and Innovation, the EU will continue investing in effective prevention, better diagnostics and game changing treatments or cures. These will make a true difference for dementia patients across the Union”, she concluded. 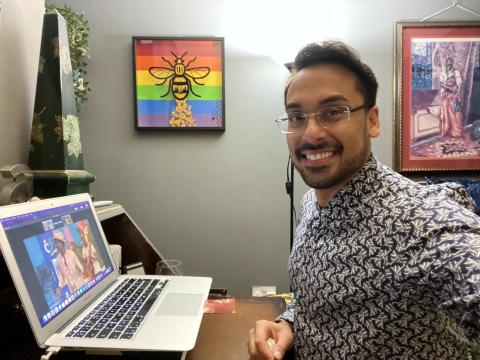 The third and final day of the conference began with the second of two keynote presentations, which focused on inclusive dementia care and particularly on the needs of the LGBTQ+ community. Patrick Italo Ettenes (He/She) Co-Founder of Bring Dementia Out emphasised the importance of considering some of the real experiences of LGBTQ+ people living with dementia, noting that many organisations are still heteronormative and cis-oriented (cisgender/cissexual/cis describes a person whose gender identity is the same as their sex assigned at birth). The need to be aware of issues around next of kin for LGBTQ+ people, who are often excluded from care decisions and who face fear of discrimination around their sexual and/or gender identities, was also highlighted. Patrick Ettenes implored representatives of dementia organisations and service providers in attendance at the conference, to ensure they understand how to support LGBTQ+ people living with dementia and provide appropriate information for those who are currently not having their needs met. The fourth plenary session focused on dementia as a public health challenge. 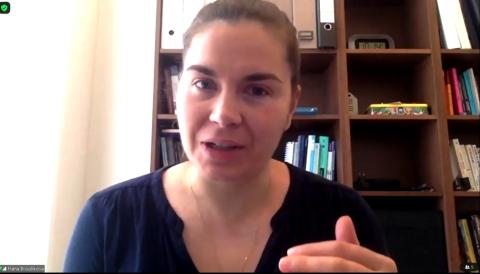 Hana Marie Broulíková, Department of Health Sciences, Vrije Universiteit Amsterdam, and Coordinator of the national dementia strategy at the Czech Ministry of Health opened with a talk on “Keeping dementia as a health priority during the COVID-19 pandemic”. 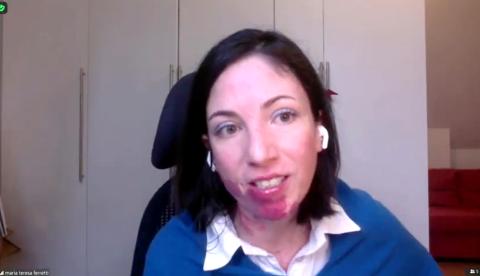 Up next, Maria-Teresa Ferretti, Co-founder and Chief Scientific Officer, Women's Brain Project, Switzerland, examined the question of whether we are getting better at taking sex and gender differences into account in Alzheimer’s care. 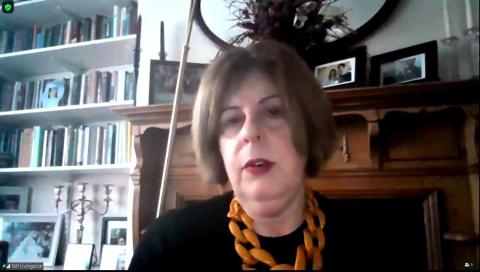 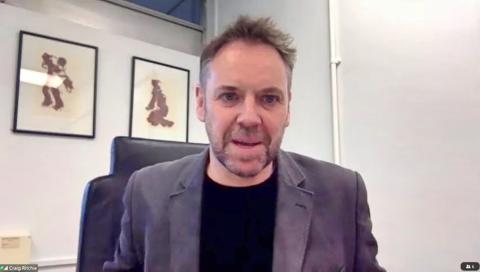 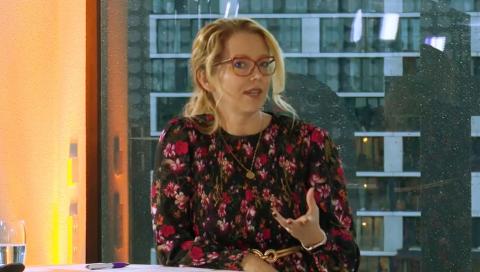 The fifth and final plenary session took the form of a roundtable discussion and the discussion topic was “Beyond the pandemic: Reinventing dementia care and treatment”. Participating in the discussion were Craig Ritchie, Director of the Edinburgh Centre for Dementia Prevention and Brain Health Scotland; Lutz Frölich, Head of the Department of Geriatric Psychiatry at the Central Institute for Mental Health in Mannheim and Chair of the European Alzheimer’s Disease Consortium, and Marjolein de Vugt, Professor at the Alzheimer Center Limburg, Maastricht UMC+.

During the closing ceremony, delegates were invited to listen to a rendition of songs by the Irish Forget-Me-Nots choir, an inclusive community choir for older people that is especially welcoming to people affected by dementia. Norah Walsh, the Musical Director of the Choir gave an update on the history of the choir and how it adapted to the pandemic. 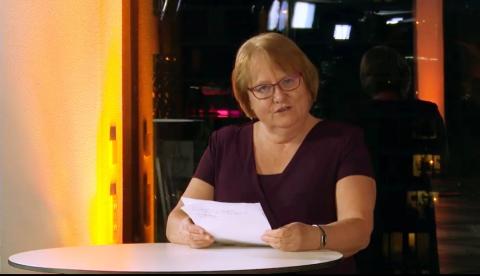 The three-day virtual conference was formally closed by Alzheimer Europe Chairperson Iva Holmerová who thanked the presenters and delegates for joining, the organising and programme committees and all conference sponsors, for making the event possible, and in particular, she expressed her gratitude to the health programme of the European Union and the corporate sponsors of the conference: AbbVie, ADDI the Alzheimer’s Disease Data Initiative, Biogen, Roche and TauRx Therapeutics. She also singled out the fantastic collaboration that Alzheimer Europe has developed with the INTERDEM network which was, as every year, strongly represented at the conference.

All delegates were invited to mark the dates of the next Alzheimer Europe Conference (#32AEC) in their calendars. “Building bridges” will take place in Bucharest, Romania from 5 to 7 December 2022. 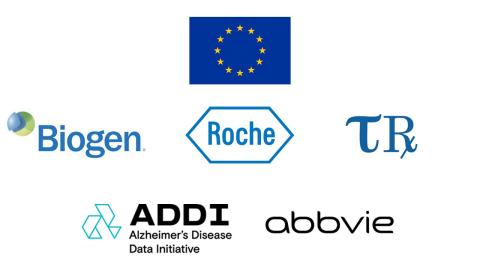