The 28th Alzheimer Europe Conference (#28AEC) “Making dementia a European priority” was held in Barcelona on 29-31 October 2018, under the Honorary Patronage of Her Majesty Queen Sofía of Spain. More than 800 participants from 46 countries attended the conference, which boasted 239 speakers and 175 poster presenters, sharing their research, projects and experiences in an atmosphere of collaboration. 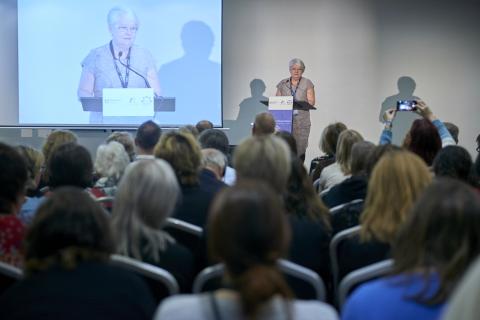 Iva Holmerová, Chairperson of Alzheimer Europe (AE) opened the conference, thanking HRH Queen Sofia for her Patronage and extending a special welcome to the 35 people with dementia attending the conference, as well as their supporters. Following Ms Holmerová, Cheles Cantabrana, Chairperson of the Confederación Española de Alzheimer (CEAFA), thanked Alzheimer Europe for helping to put dementia in the spotlight in Spain and emphasised the importance of Spain taking the final step to approve its national dementia strategy, the creation of which has been one of the focal points for her organisation in recent years. Next, Noemí Martínez, Vice-Chairperson of Fundación Alzheimer España (FAE), highlighted some positive changes in recent years, for people with dementia and their carers but stressed that there are still too many differences across Europe with regards the length of time from diagnosis to end-of-life. Improving early diagnosis rates will be one of the focus points for her organisation, going forward. 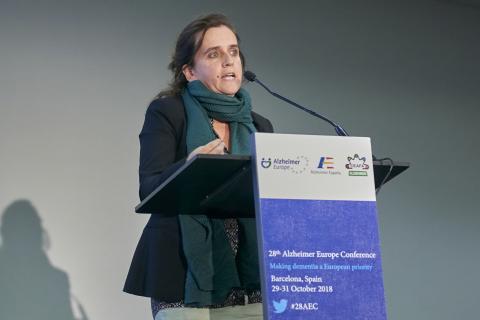 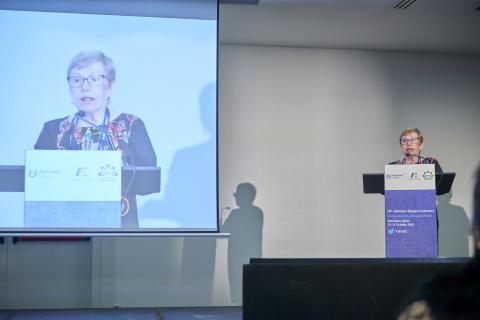 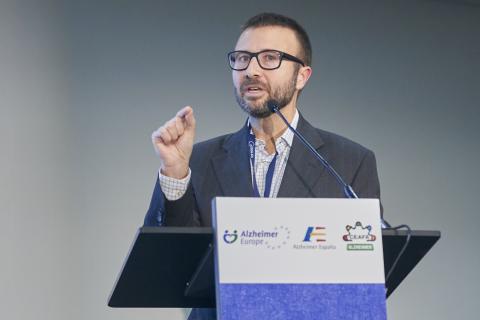 The keynote lecture was delivered by Dr Jose Luis Molinuevo from BarcelonaBeta Brain Research Center. In presentation “Will we be able to prevent Alzheimer’s disease?” he gave an overview of the challenges and opportunities regarding the prevention of Alzheimer’s disease (AD). He expressed the rationale behind preventing AD and the reason why prevention may be a key way forward to tackle it. However, he stressed, this is far from easy and there are many challenges along the way. 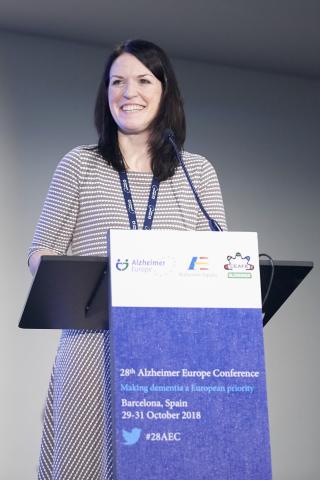 On 30 October, the first plenary session on “Dementia as a policy priority” was chaired by Jesus Rodrigo (Spain) and opened with the first of four “Meet the researchers of tomorrow” sessions. Anja Leist, Associate Professor at the University of Luxembourg, presented the World Young Leaders in Dementia (WYLD) network, which brings together young professionals in the field of dementia, supporting the work of the World Dementia Council. The second speaker was Carmen Orte, Director General of IMSERSO (Instituto de Mayores y Servicios Sociales), who presented “Dementia as a health and social priority in Spain”. Geoff Huggins, Director of Health and Social Care Integration at the Scottish Government took the floor next, delivering a presentation on the EU Joint Action (JA) ‘Act on Dementia’, which began in March 2016. Dr Dan Chisholm, Programme Manager for Mental Health at the World Health Organisation (WHO) Regional Office for Europe (Copenhagen, Denmark) spoke next, about prioritising dementia internationally and specifically about the WHO’s Global Action Plan on the public response to dementia 2017-2025. The final speaker in Plenary 1 was Prof. John Gallacher, Project Co-ordinator of the IMI ROADMAP project (Real world Outcomes across the Alzheimer’s Disease spectrum for better care: Multi-modal data Access Platform), who shared the work done by the project so far.

The second plenary session, which took place on the same day, focused on “Dementia as a human rights priority” and was chaired by Charles Scerri (Malta). The session opened with the second “Meet the researchers of tomorrow” session, delivered by Stina Saunders, a fellow at the IMI EPAD project (European Prevention of Alzheimer’s Dementia) and a doctoral candidate at the University of Edinburgh. Her talk focused on engaging research participants as collaborators working towards a common goal with the study team. Helen Rochford-Brennan, Chairperson of the European Working Group of People with Dementia (EWGPWD), took the floor next, to talk about promoting a human rights-based approach to dementia through the active involvement of people with dementia. Dr Fernando Vicente, advisor to the General Directorate of the Institute of Older People and Social Services (IMSERSO) of the Ministry of Health, Social Services and Equality, was up next. Addressing the room in Spanish (simultaneously translated into English), Dr Vicente spoke about Human Rights in Spanish health and social legislation. Dr Dianne Gove, Director for Projects at Alzheimer Europe was the fourth speaker, giving delegates an overview of AE’s work on dementia and disability. Dr Karen Watchman, Senior Lecturer in the Faculty of Health Sciences and Sport at the University of Stirling, closed the second plenary session with a talk on dementia and intellectual disability. 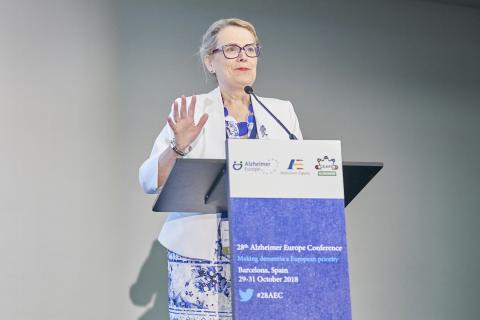 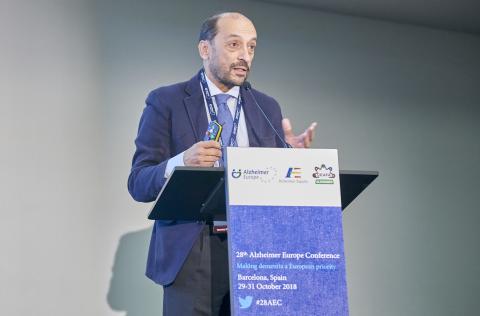 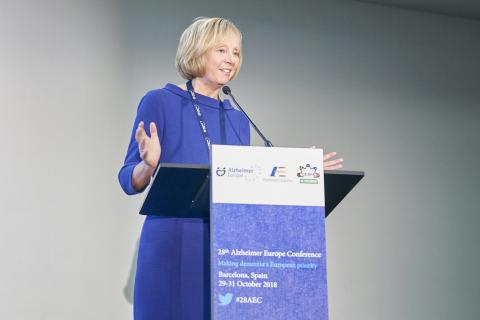 The third plenary session “Dementia as a care priority” took place on 31 October. It was chaired by Myrra Vernooij-Dassen (Netherlands) and opened with the third “Meet the researchers of tomorrow” session, with Sébastien Libert, a PhD student based at University College London, and part of the Interdisciplinary Network on Dementia Using Current Technologies (INDUCT). The next speaker was Gail Mountain, Professor of Applied Dementia Research and Director of the Centre for Applied Dementia Research at the University of Bradford. She used her presentation to urge delegates to work together to reconsider the appropriateness of commonly-used outcome measures in dementia practice and research. Marjolein de Vugt, professor of psychosocial innovations in dementia at the Mental Health and Neurosciences research school, Maastricht University then presented the ‘Partner in Balance’ programme, followed by Manuel Martín-Carrasco, Medical Director of the Father Menni Psychiatric Clinic of Pamplona, who spoke to delegates about reducing the use of antipsychotics in residential and nursing homes. The final speaker in Plenary 3 was Martina Roes, Chair of Nursing Science and Health Care Research at the Department for Nursing Science, Faculty for Health, University of Witten/Herdecke. She closed with a presentation on “fostering and sustaining relationships with people with dementia”. 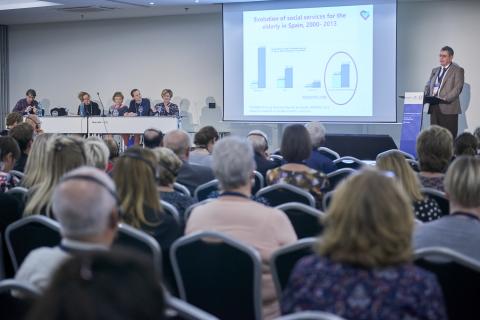 The last plenary session focused on “Dementia as a research priority” and was chaired by José Manuel Ribera Casado (Spain). It began with the fourth and final “Meet the researchers of tomorrow” session, presented by Isadora Lopes Alves, who is currently doing her postdoctoral research for the IMI AMYPAD project (Amyloid Imaging to Prevent Alzheimer’s Disease) at the VUmc, Amsterdam. Next, Maria Isabel Gonzalez Ingelmo, Managing Director of the National Reference Centre for Alzheimer’s and Dementia Care of the Institute for Older Persons and Social Services (IMSERSO), under the auspices of the Spanish Government, informed delegates that her organisation is committed to promoting research into non-pharmacological therapies, through networking and transferring knowledge. Mercè Boada, Founder and medical director of Fundació ACE, used the next presentation to stress the important role EU research collaborations, such as the MOPEAD project, can play in helping to improve the diagnosis of AD. Next up to the podium was Philippe Amouyel, Professor of Epidemiology and Public Health at the University Hospital of Lille, with a presentation on the genetics of AD. The final speaker at Plenary 4 was Professor Clive Ballard, who is part of a growing team of dementia researchers at the University of Exeter Medical School. His presentation looked at pharmacological options for the treatment of behavioural symptoms of dementia and specifically at the recent international Delphi consensus paper.

The three-day conference was formally closed by AE Chairperson Iva Holmerová, who thanked conference co-hosts CEAFA and FAE, as well as all speakers and poster presenters. She also said a special thank you to the various sponsors of the conference:

Ms Holmerová, together with colleagues at Alzheimer Nederland, invited all delegates to mark the dates of the next Alzheimer Europe Conference (#29AEC) in their calendars. “Making valuable connections” will take place in The Hague (Den Haag) from 23 to 25 October 2019. 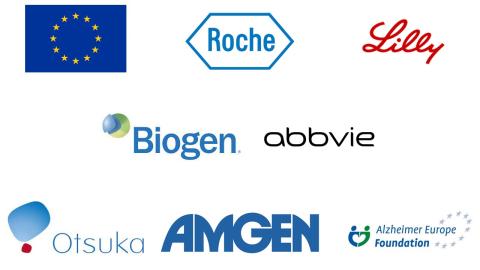