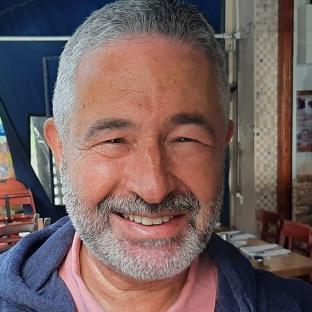 Following a career as an international marketer director in business software, Trevor chose to step away from his role in 2011 when it became evident he needed to devote time to his wife, Yvonne, and her emerging memory problems which were eventually diagnosed as young onset Alzheimer’s disease when she was 57 years old.

His approach to looking after her emulated the style he adopted in his work life, namely to see obstacles simply as inconveniences which have to be circumnavigated…….no ifs, no buts, no choice.

With Yvonne in a care home since 2019, Trevor supports other carers and always with a positive, decisive outlook on life. He is a regular speaker at events and in the media, helping to raise awareness about those living with dementia and the challenges faced by family members who support them.

Trevor lives in North West London, not far from the famous Wembley Stadium, and has two children and two young grandsons.

Trevor was nominated by the Alzheimer's Society.