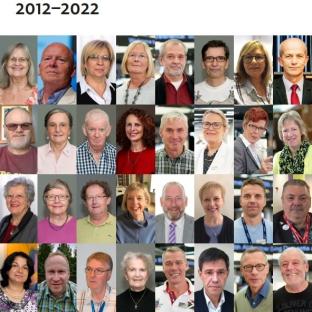 Alzheimer Europe is proud to launch a special publication, to celebrate 10 years of the inspirational work of the European Working Group of People with Dementia (EWGPWD). Congratulations to the group on its 10th anniversary! The publication was launched by MEP Deirdre Clune at our European Parliament lunch debate in Brussels on 14 June 2022, together with the latest Dementia in Europe magazine (issue 39). The EWGPWD was launched by Alzheimer Europe and its member associations in 2012 and is composed entirely of people with dementia, who are nominated by their national Alzheimer associations. Each term of office lasts two years, with the current term ending in October 2022. The group operates independently and members elect their own Chairperson and Vice-Chairs. The Chairperson is an ex-officio member on the Board of Alzheimer Europe, with full voting rights. Group members work to ensure that the activities, projects and meetings of Alzheimer Europe duly reflect the priorities and views of people living with dementia. They also consult on EU-funded research projects and participate actively in Alzheimer Europe’s annual conferences and contribute towards Alzheimer Europe’s work on ethical issues. They attend international dementia-related events, including at the European Parliament, as representatives of the EWGPWD. Until the end of 2021, the important work of the group was funded by an operating grant under the European Union’s Health Programme. It is now funded by a new operating grant from the European Union, under the Citizens, Equality, Rights and Values (CERV) programme. The Alzheimer Europe team and Board look forward to continuing their collaboration with the EWGPWD and would like to express their gratitude to the Executive and members of the group, past and present, for their hard work and support. A big thank you to the Alzheimer Europe Foundation, which sponsored this publication. You can download the celebratory publication, here: https://www.alzheimer-europe.org/sites/default/files/2022-06/celebrating_10_years_of_the_ewgpwd_june_2022.pdf It is also possible to order paper copies, via the publications section of our website.