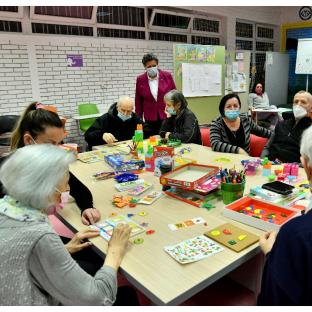 Serbia belongs to the "older" countries with 21.3% of its population being 65 years old or more. It is estimated that more than 120,000 people in Serbia are living with Alzheimer's disease and other types of dementia. While there is institutional support for families caring for people with dementia, through financial compensation for the help and care of another person, only a small number of the affected people benefit from it because the conditions for receiving that compensation are very strict. The capacity for the accommodation of older people in welfare institutions can only support 0.8% of the older population and there are no specialised community services for patients with Alzheimer's disease and other types of dementia except for two day care centres at two gerontology centres, in Subotica and in Kragujevac. That's why, in June 2021, in Belgrade, the Serbian Association for Alzheimer's Disease ran the pilot programme of the day care centre for patients and counselling centre for their carers/supporters. The Centre is open every Thursday from 3 pm to 7 pm. Staff carry out occupational therapy and entertainment activities to help engage the patients. They also provide information and advice to the carers/supporters.

This June, the Serbian Society for Alzheimer's Disease celebrated the first anniversary of the Centre, together with health and welfare system officials, service users and their carers, and volunteers. They presented the results of the pilot programme and discussed its effects on patients and carers. The weekly functioning of the Centre is insufficient, so the Society cannot state that the service has contributed to the improvement of patients' general health, however, according to the statements of relatives and to their own observations, they were able to conclude that the activities being carried out contribute to an increase in self-confidence for patients, as well as to mood improvement. With advice and support, the staff empower patients' family members to grow in their complex caregiving/supportive role. It was noted that the opportunity to meet other carers is extremely important to them. With the financial support of the Swiss government, within the project "For an Active Civil Society Together", the Serbian Society for Alzheimer's Disease is now launching a community awareness campaign on recognising dementia, on the needs of patients and their relatives, as well as on the positive effects of the programme. They are also advocating for the city of Belgrade to continue to develop and finance the service of the day care centre.