Jayne Goodrick and her husband Chris Roberts, Chairperson of the European Working Group of People with Dementia journeyed to London to pay their respects to Queen Elizabeth II 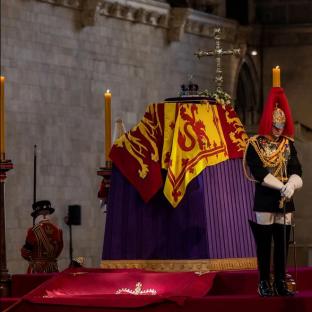 The Queen's Walk, Our Queen died.

It was such a shock! We had all been able to see how frail she was becoming, but her eyes were still shining and bright, and she welcomed our new Prime Minister (let’s not go there!), just two days before she died. The outpouring of grief was palpable. Yes, there were some who chose the opportunity to politick, but their voices faded into nothingness. We knew there would be a lying-in-state, and had always planned to attend, but circumstances led us to be elsewhere in the week before her funeral. And then the queue started. It gave everyone an opportunity to go, pay our respects, but be a part of something bigger. The news was all about the waiting times: nine hours, 14 hours, even 24 hours were reported. Chris knew I really wanted to go, and said he would do whatever I decided (Thanks, dementia. No joint decision-making on this one!). It got to Friday and we looked at our commitments: If we left at 6.30 on Sunday morning, we might just be able to make it. There was also a disabled access queue, lessening the wait time, but that was going to close on Saturday afternoon. The doors would close at 6.30am on Monday, the day of the state funeral. We set off, with 24 hours to go. We had a minimum five hour drive.

All the planned motorway closures for maintenance, repairs, etc. had been suspended in order to create smooth passage for the thousands expected to descend on the last day. The [radio] news regularly updated us: “queue is now 12 hours long, do not travel” “queue is now 13 1/2 hours, do not travel”. Yeah, right! We were already travelling, we had our campsite booked in South London as we were in our motorhome (one-room living, familiar surroundings, bathroom always in the same place. Very dementia-friendly). “Queue is now 14 hours long DO NOT TRAVEL!” We hit Kensington. This is the point where we now have to traverse London through its collection of villages. And we have to turn right at lights. A police motorbike came screaming through, sirens blaring, stopped at the lights and another followed closely behind. We all pulled over as far as we could, and they halted the traffic. We wondered what was happening. Then we saw more blue lights behind. “Chris! It’s a dignitary!” I shouted. “Get your phone out!” Unfortunately, whoever it was of such importance that the windows were obviously blacked out. Well, a bit of excitement to start our Queen’s journey. We got to our campsite an hour later. “No entry until 1pm”. We parked in a tiny dead end just outside the gates. Another motorhome arrived five minutes later and parked opposite.

The other four that came in succession over the next half hour had to drive elsewhere (bear in mind, we were in London, in nothing smaller than six-metre-long vehicles, and with a state funeral the next day!). At 12.50, we drove in, followed gradually by the other vans. Check-in opened at 1.01 pm. She was apparently on lunch? (what we describe in the UK as ‘Jobsworths’, who have a “more than my job is worth” attitude). Anyway, we had a quick chat with the others who were going. One was taking Uber (Sharp intake of breath! Does he know London?). We opted for train/tube. Overground to Rotherhithe; a five minute walk to Southwark park; then The Queue. And we ran! (As fast as you can with emphysema!). When we got to Rotherhithe, we expected hordes, but there was no-one! No one else got off the train! That was a concern. We stepped out of the station, and the streets were empty (Were we in the right place? We wondered.) We followed the Google Maps walking route and found The Queue! We were in time! The media had created such a hype about queues, but there weren’t so many people there. So, we got our wristbands, and joined The Queue.

Chris had been so wired by my stress at getting here in time that he sped ahead. That, is dementia. We were here, we had our bands, no need to rush. Eventually, we reached the other side of the park and were halted. "Here we go", I thought. But no, it was just to stop the traffic and cross us safely over the road. There, we met two entrepreneurial young guys, maybe about 10 or 12 years old, selling Coke, water, Fanta, etc. Fantastic to see that entrepreneurial flair! And then, The Queue proper, started. We snaked down one street; along the Thames; back up the next street. We passed a Co-Op (local supermarket), where I ran in for tissues and the pregnant lady behind me for something else. We re-joined the queue where we had been before and, by this time, we had started talking to our neighbours, those in the queue next to us. We started to develop a cohesive bonding of purpose. As we walked (shuffling sometimes, fast-walking other times), our position shifted; sometimes with one group, sometimes another. But at a point (imperceptible) we became "our group". Hard to define, but obvious when it happened. Then we could go off for toilets (which were lined at many points), pop to the (many) stalls for tea/coffee/beer. It really was a collective experience. We passed Queen Elizabeth Street, Tower Bridge and the Tower of London. Then, the Tate Modern (with outside displays), the Globe Theatre (Shakespeare’s domain), street stalls, food stands, tea and coffee, etc. We also met some of the soldiers that were brought in for added security, to escort our Queen. By this time, it was getting dark. There was a cold spot where we were, squeezed between tall buildings and the Thames. And it was very chilly. We passed the London Dungeon (by London Bridge, I think?), the Shard, and then, after the fun of the street market stalls, we hit the London Eye and tried to take a spectacular photo, but hey, we’re not photographers (Chris is much better than me!). Then, there was a long delay.

Things really slowed down, and then we had the two minutes of silence, in respect for Her Majesty, after which it started to move again, but slowly. We were at Westminster Bridge, south side. “If you have anything you don’t want to lose, check it in!”, they said. We had nothing. Water, perhaps, but nothing else that we knew of. We crossed the bridge ("all traffic closed and diverted”, and went down the steps, along the Thames path. It was dark, when we realised we were walking past the Covid wall - the wall with the names of all who had died because of Covid, during the pandemic (obviously, not all the names, but people wrote the names of their loved ones around and in the hearts. They were creating new hearts). I resisted writing one name, as I had not asked permission of his wife. I believe she will now go and write his name there. Then, it was dark, late, cool, and we needed the facilities. The queue moved forward. Chris wanted to go, and one woman from our group said “I’ll come with you". Chris had his torch. By this time we had left the general public and were now one queue, moving forward. Her daughter and I kept glancing back, as the queue moved forward. After 50 metres, perhaps, I saw a light. Chris’ torch! Our companion’s daughter and I were both imperceptibly relieved.

Chris explained later that his companion had said “whoever comes out first, we’ll wait for the other”. Very fortuitous, as when he stepped out, she waved to him. He thinks he would have been lost in the crowd, otherwise! Then there was a tea bar! Free, and run by a Sikh charity. They even had hot chocolate! One of our group had asked for one much earlier, but only tea and coffee had been available. “We have Kit-Kats!” they cried, and a cheer went up. Another collective win! There was a change of charity/staffing, and we moved on to Lambeth Bridge. This was the coolest part, for obvious reasons, but the queue moved steadily, so there was no real chance to get cold. Across the river, we went, to the Westminster side, and through some more security - officers with big guns (automatic, semi-automatic!). And then, the "zig-zags", as they had become known: rows of fencing like in an airport security queue, or a festival. Up, down, up, down, up, down. But no one was impatient and there was no whinging. We were all there for the same reason - to see our Queen. There were toilets at various points. This was the only point where there was the potential to lose your group.

Finally, came the last leg, in single-lane travel. “Anything [food] open, in the bin. Anything sealed, here, for the food bank!” “Cameras off!” Then we reached security. We tried to stay together with our group. After travelling together all this time, it would have been nice to complete the journey together, but no, it wasn't possible: “You, here. You, here. You, here.” - "But what about our friends?!" - "You can see them the other side." So, we went through what was, in essence, a very efficient airport security check. I had no problem (obviously). Chris, on the other hand, had a tube of something, which was binned, and a torch. Since his dementia, Chris has become a bit fixated on torches. And I cannot disagree with him, because when we might sometimes find ourselves in precarious situations, and in the dark, he is always able to save the day and get us out of trouble! Today was no exception. When he went to the toilet with our companion, he was able to see, and we were able to see him returning, because of the torchlight. It was also a power bank. They took it off him. By this time, I was through security and feeling a bit stressed as to what was going on. But it was all good. He objected, but then took it in his stride - I believe because we had been on such a journey through the day, he was too tired to argue (which would have done no good at all). These are the occasions where you can only leave it in the hands of whoever/whatever you call your Higher Power, and hope for the best! We were through. We looked for our travel companions, but they were nowhere to be seen. We came to the staircase, we were directed to one side or the other, ascended, turned to our left and Westminster Hall was displayed before us. We went down, more slowly than others, because Chris’ mobility was compromised. One step at a time. We were before her Majesty. Chris bowed. I waited a second, and bowed also. The coffin was high, I was a bit rushed through my own fault, and I was over-awed. I saw the flag and the coffin, and then we moved on. The guard to our left thanked us! He said “Thank you, sir” to Chris, and then “Thank you, Madam” to me! Neither of us heard him say it to anyone else, and if he did, it didn’t matter! He thanked us both personally for paying our respects! And then, it was over. We were outside; phone back on; daughter, texting and finding us on the live feed. We finally had our personal audience with our Queen.