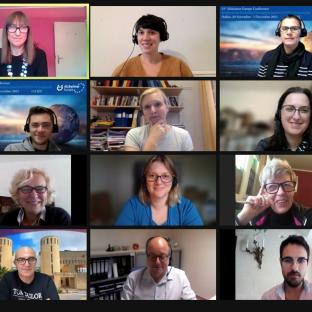 On 16 November 2021, Alzheimer Europe held an online session of its popular Alzheimer's Association Academy (AAA) series. The topic for this session, which was chaired by Dianne Gove, Director for Projects at Alzheimer Europe, was on gender, sex and sexuality in dementia. Representatives of member associations, members of the European Working Group of People with Dementia (EWGPWD), representatives from pharmaceutical companies, and AE staff participated in the AAA session.

The first speaker was Annemarie Schumacher Dimech from the Women’s Brain Project (Switzerland) who provided an overview of gendered risk factors for dementia. She explained the importance of taking in consideration the gender differences in brain and mental health. She provided some specific examples, which were published in the 2020 report of the Lancet Commission by Livingstone et al. The paper reports 12 modifiable risk factors that account for around 40% of worldwide dementias, which consequently could theoretically be prevented or delayed, including education, obesity, depression and lack of physical activity. Annemarie underlined that persistent gender-based inequalities place women at a disadvantage for many modifiable risk factors contributing to dementia.

The second presentation was delivered by Linn Sandberg from (Sweden) and was entitled “Quality of life and access to care for LGBT* people with dementia”. She explained what does research tell us more generally on older LGBTQ people and care needs. In her talk, Linn emphasised that LGBTQ people has a higher risk of cognitive impairment among sexual minority older adults. Risk factors include depression, loneliness and isolation, obesity, poor cardiovascular health and smoking. LGBTQ-people with dementia are more likely to reside in care homes (fewer have children) and informal care networks consisting of ”families of choice” rather than families of origin. Linn also presented key published findings on how gay and lesbian people experience dementia and on the understanding of experiences and needs of LGBTQ people. Finishing her talk, Linn stressed the need for more awareness and training of dementia care staff and highlighted that dementia should not be a barrier to expressing one’s sexual or gender identity.

The final presentation was delivered by Aileen Beatty from Akaricare (UK) who spoke about the relationships and sexuality in care homes. She first gave a regulatory context on the relationships and sexuality in adult social care services from the CareQuality Comission (CQC) - the independent regulator of health and social care in England. The guide published in 2019 is aimed at CQC staff. Aileen added that the definition of sexuality is deliberately broad and gave some reactions to this guidance. She described some findings from the 2020 CQC sexual safety report, which highlighted “devastating” cases of sexual abuse in social care. She also provided some specific examples of experience in care and the influences on responses of staff. Finally, Aileen gave some recommendations including the focus on meeting people’s needs in a safe way while protecting others in car, ensuring that services have sufficient resources to support people to stay safe in the least restrictive way and avoidance of language such as abuser / perpetrator in relation to people living with dementia. The presentations were followed by an interactive Q&A discussion, during which questions from the audience were addressed by the panel.