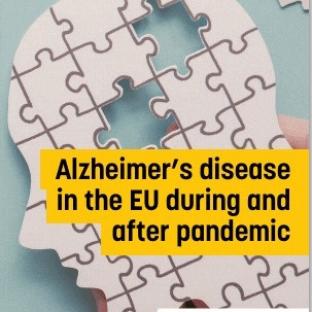 Ana Diaz, Project Officer at Alzheimer Europe and Chris Roberts, Chairperson of the European Working Group of People with Dementia (EWGPWD) have contributed to a special report by EURACTIV, about Alzheimer’s disease in the EU during and after pandemic. The report includes five articles:
The first article, published on 29 November 2021, features Dr Natasha Azzopardi Muscat, Director of Country Health Policies and Systems at WHO Regional Office for Europe: WHO official: COVID-19 seriously worsened dementia’s state-of-play in Europe.
The second article, published on 7 December, features Chris Roberts and his wife and carer Jayne Goodrick, who highlight some of the challenges both patients and carers face daily: Dementia: everyone has heard the word, but no one understands.
The third article, published on 8 December, discusses the benefits of patient involvement in dementia research and includes a comment from Ana Diaz: ‘Increasingly popular’ patient engagement in Alzheimer research is bearing fruit.

The fourth article, published on 10 December, is written by EFPIA and looks at concrete steps Europe can take to be prepared for Alzheimer’s disease: European health systems must prepare for Alzheimer’s.

The fifth article, published on 10 December, examines transposing research outcomes into digital products and services: Alzheimer’s researchers do not want to get lost in digital translation.
The report received support from the European Federation of Pharmaceutical Industries and Associations (EFPIA). It can be downloaded below.

Attachments
Document
Alzheimer’s disease in the EU during and after pandemic_All 5 articles_20211210.pdf (1.09 MB)