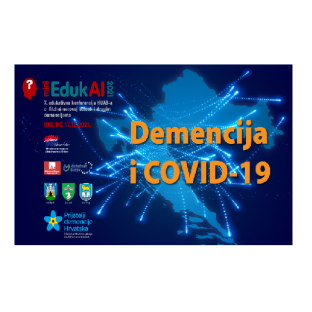 27/04/2022
Dementia Jersey briefing for members of States of Jersey government leads to a commitment to create a dementia strategy
26/04/2022
Alzheimer Hellas supports new project "Genetic counseling in European universities: The case of neurodegenerative diseases" (GECONEU)
13/04/2022
Spominčica's proposal for the establishment of a dementia management council is accepted by the President of the Republic of Slovenia
29/03/2022
There are half a million Dementia Friends in the Netherlands
23/03/2022
Alzheimer Hellas announces launch of Erasmus+ programme “Game4CoSkills”

This year's EdukAl, held online on 17 December 2021, attracted a record number of participants (515) from Croatia, Sweden, Slovenia, Bosnia and Herzegovina and Montenegro, so this gathering that deals with practical issues of care and nursing for people with dementia has become the most prominent place for regional exchange of knowledge, skills and experiences in this mostly neglected public health area in its particular region.
The City of Zagreb, as a dementia-friendly community, has been supporting the work of the Alzheimer Croatia for many years and successfully cooperates with it, among other things, in various European projects - said Mirela Šentija Knežević, PhD, delegate of the Mayor of the City of Zagreb, Tomislav Tomašević and Head of the City Health Office.
As many eminent Croatian scientists, neurologists and psychiatrists pointed out at the 7th EdukAl, COVID-19 infection can significantly affect cognitive abilities. This is especially dangerous for people with Alzheimer's and related diseases because it worsens the symptoms of dementia. The conference also noted that, in Croatia, the statistics showed a relatively low level of COVID-19 infection among people with dementia in nursing homes, but that epidemiological measures of "locking down" have had a negative impact on people with dementia, especially those who already found it difficult to understand and remember. They should be further protected during this pandemic, it was noted.
Participants of EdukAl 2021 welcomed the information that a modern ward for people with dementia will soon open in another home for the elderly in Zagreb, and that the users of the Home for the Elderly in Glina will return to it until the upcoming holidays.
Among other things, the conference discussed the real possibilities of a new drug against Alzheimer's disease, aducanumab, whose use is conditionally approved in the US, but for which Europeans will have to wait, because the European Medicines Agency has decided to wait for results of the final clinical trials for this new and very expensive drug.
Particularly touching was the speech of a member of the Alzheimer Croatia, in which he pointed out that his bigger problem was fighting the administration rather than dementia itself. He is the youngest person diagnosed with Alzheimer's disease in Croatia, having contracted it at the age of 40. He is no longer able to work, so he lost his job, and the competent services do not recognise his disability. Therefore, with the help of Alzheimer Croatia, he is fighting to correct this injustice and to have his right to such income recognised.
•    Among the conclusions of the conference are the need to:
•    develop a comprehensive education programme for formal and informal caregivers
•    establish a program for early diagnosis and de-stigmatisation of dementia
•    ensure respect for the rights of people with dementia
•    update the process of adopting the National Alzheimer's Plan in accordance with World Health Organization recommendations.
https://www.edukal.alzheimer.hr/edukal-2021