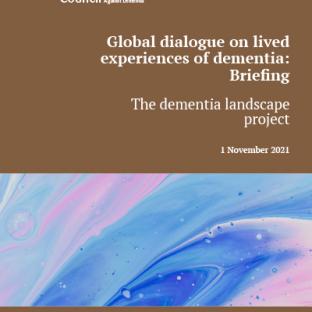 The dementia landscape project was launched by the World Dementia Council (WDC) in 2021, aiming to review international progress towards the 2025 goals identified at the 2013 G8 dementia summit. As part of this project, the WDC is hosting a series of global dialogues with members of the international dementia community, reflecting on where we have come from, where we are now, and what the next steps should be. On 1 November 2021, the WDC organised a global dialogue on lived experiences of dementia, as part of the dementia landscape project. People living with dementia led the dialogue, which aimed to assess policy priorities. The discussion was led by Hilary Doxford, former Vice-chairperson of the European Working Group of People with Dementia (EWGPWD), Alzheimer's Society ambassador and member of the World Dementia Council, and Maryna Lehmann, dementia advocate from South Africa and member of the World Dementia Council. Panellists included EWGPWD Chairperson Chris Roberts, as well as former Chairperson and founding member of the EWGPWD Helga Rohra. The meeting was opened by Lenny Shallcross, Executive Director of the WDC, and opening remarks were made by Hilary Doxford. Ms Doxford then proceeded to ask the panellists a series of questions, including whether they thought things had improved for people with dementia, what some of the biggest challenges are for people living with dementia and what they felt their national governments should prioritise in order to better support people with dementia.