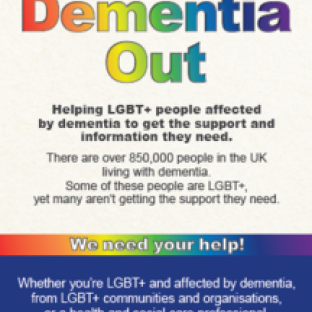 On 11 January, Bring Dementia Out was launched. As part of this innovation, the UK National Dementia Action Alliance (DAA) has co-produced a booklet and poster with LGBT+ people affected by dementia, the Alzheimer’s Society, and LGBT+ organisations (including Switchboard in Brighton and Hove, LGBT Foundation in Manchester, and the National LGBT Partnership). Bring Dementia Out is an innovation that aims to help LGBT+ people affected by dementia get better access to support and information in Brighton and Hove and Greater Manchester. The booklet sits alongside a series of resources, including a video, online hub and posters, to raise awareness and understanding of challenges faced by LGBT+ people affected by dementia. This is being tested out in Brighton and Hove and Greater Manchester during January and February 2019.

You can find out more and order a (free) copy of the report, here: alzheimers.org.uk/get-involved/bring-dementia-out