The PRODEMOS project holds its General Assembly meeting in Luxembourg 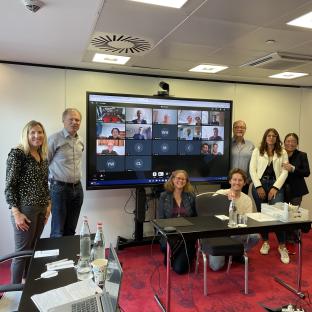 On 19-20 September, the Prevention of Dementia using Mobile phone Applications (PRODEMOS) project held its General Assembly meeting in Luxembourg. The project is aiming to make an evidence-based dementia prevention strategy using mobile Health (mHealth), accessible to those at increased risk of dementia. Alzheimer Europe is a partner in the project and was pleased to host the meeting. The meeting commenced with Jean Georges welcoming delegates in Luxembourg. Then, Edo Richard introduced the meeting and highlighted the achievements of the past year. Following on from the introductory session, a session was dedicated to the health economic aspects including the cost-effectiveness analysis. Next, Cindy Birck presented the news items that are published on the PRODEMOS application and adapted to the target population. This was followed up by a recap of the analysis plan and the presentation of a new cross border project between Academic Medical Centre Amsterdam (AMC) and the French National Institute for Health and Medical Research (INSERM).

The first day was brought to a close with two break-out rooms dedicated to future projects and the challenges of the lifestyle intervention. The second day of the meeting started with a session dedicated to the trial, both in UK and China, including the feedback from the coaches and the final assessments. The recruitment in the main PRODEMOS study was formally ended in April and the study succeeded in recruiting 600 participants in UK and 886 participants in China. After a short break, an overview of the baseline data was presented, then followed by a session on dissemination, management and finances. Eric Moll Van Charante then drew the meeting to a close, thanking all the participants for their active contribution to the meeting. This project has received funding from the European Union’s Horizon 2020 research and innovation programme under grant agreement No 779238 and the National Key R&D Programme of China (2017YFE0118800). Further information on the PRODEMOS project can be found here: https://www.prodemos-project.eu