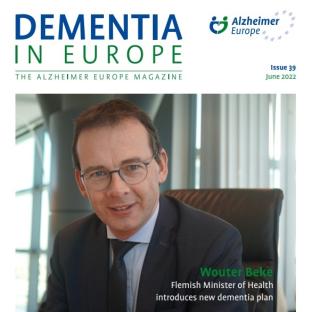 It is with great pleasure that we introduce the 39th edition of our Dementia in Europe magazine. This edition has been published electronically but also in paper format, for the first time since the start of the global pandemic. It was launched by MEP Deirdre Clune at our European Parliament lunch debate in Brussels, on 14 June 2022, together with the latest Dementia in Europe magazine (issue 39). It is full of interesting articles on the latest developments in the field of dementia, with plenty of excellent work taking place at a national and European level. We open the Alzheimer Europe section by looking at the Operating Grant Alzheimer Europe has received under the EU’s Citizens, Equalities, Rights and Values programme, which sets the direction of our work for the years ahead. We then revisit the European Parliament Workshop held in March 2022, which examined how social and disability policies at an EU-level impact upon the lives of people with dementia, their families and carers. We also cover our most recent Alzheimer's Association Academy session, held in April and focusing on “giving a voice to people with dementia”. In the area of research, we focus on three of the European projects in which we are currently involved. Petra Ritter from VirtualBrainCloud explains the progress made in the project as it seeks to create a “digital brain” to help in the development of treatments for Alzheimer’s disease. The following article celebrates the announcement that genomic data from the European Prevention of Alzheimer’s Disease (EPAD) project, will be included in the Alzheimer’s Disease Data Initiative (ADDI) platform to provide the global neuroscience research community with even greater access to the data.

The article also includes comments from Craig Ritchie, EPAD Project Coordinator, and Tetsuyuki Maruyama, Executive Director of ADDI. Next, we look at the newly- launched Neuronet Decision Tool, which will help projects and other stakeholders identify suitable processes and procedures for interacting with regulators, Health Technology Assessment bodies and payers. We round off this section hearing about how Alzheimer Europe and three members of the European Working Group of People with Dementia (EWGPWD) have been involved in the World Joint Artificial Intelligence Network (JAIN) Challenge, which aims to form an international learning community to develop e-health products and services. In the Policy Watch section, we are delighted to feature an interview with the (now former) Flemish Minister for Welfare, Public Health, Family and Combating Poverty, Wouter Beke, on the new Dementia Plan 2021-2025 which builds on the excellent work undertaken in Flanders, Belgium, in recent years. Turning to policy and advocacy matters at a national level, Lorène Gilly of France Alzheimer outlines the “Alzheimer’s has disappeared” campaign taking place during the presidential and legislative elections. We continue at the national level, as Clodagh Whelan of The Alzheimer Society of Ireland (ASI) talks about the briefing session for politicians led by ASI during Brain Health Week in March. Staying with the theme of brain health, the following article examines a patient organisation-led Call to Action, in which Alzheimer Europe has been heavily involved, demanding greater patient involvement in brain health policy at an EU level. Moving to international policy, Marine Uldry of the European Disability Forum (EDF) outlines the current review of the EU compliance with the United Nations Convention on the Rights of Person with Disabilities and explains how EDF contributed to the process. Finally, Laura Garcia Diaz of the World Health Organization shares how they have been involving people with dementia in the review of resources for the Global Dementia Observatory Knowledge Exchange Platform.

In our final section, Dementia in Society, we open with an article looking at what the governments and Alzheimer associations in my country (Czech Republic) and in Poland are doing to support people affected and displaced by the ongoing invasion of Ukraine, particularly those affected by dementia. In the next article, Pat McLoughlin, former CEO of The Alzheimer Society of Ireland reflects on his time at the organisation, from which he recently retired – we wish him a happy and well-deserved retirement! Staying in Ireland, we look at the appearance of Helen Rochford-Brennan on The Tommy Tiernan Show. Helen, a member of the EWGPWD, highlighted issues around diagnosis, advocacy, funding and homecare. In our final article, we hear from Professor Jean-Charles Lambert and Dr Céline Bellenguez about their fascinating research identifying novel risk loci for Alzheimer’s disease, and about their development of a new genetic risk score for Alzheimer's disease. Our magazine also has a special supplement, in which we celebrate 10 years of the inspirational work of the EWGPWD. You can find out more about this in a separate news item about the launch of this special celebratory supplement. Alzheimer Europe is grateful for the support of its corporate sponsors, without whom the Dementia in Europe magazine would not be possible. You can download the 39th edition of our magazine, here: https://www.alzheimer-europe.org/sites/default/files/2022-06/dementia_in_europe_magazine_issue_39_june_2022.pdf It will also be possible to order paper copies of the magazine in the coming days, via the publications section of our website.