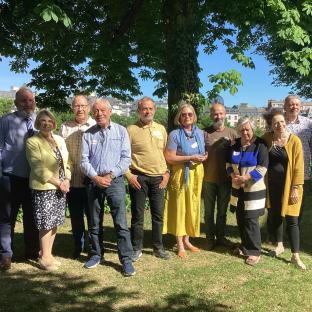 On 13 to 14 May, the members of the EWGPWD and their supporters met in Luxembourg and worked on several projects within the framework of public involvement. It was a hectic but very productive two days during which the group worked on a number of different topics and projects including the use of technology by people with dementia during the pandemic, augmented reality, social robots in care homes, artificial intelligence-based dementia risk prediction tools and respectful communication. Ana Diaz and Dianne Gove moderated the various debates, together with Simone Felding from DISTINCT/DZNE who is doing a short secondment with Alzheimer Europe. Angela Bradshaw and Jean Georges also joined for a few sessions. Chris Roberts, Chair of the EWGPWD, moderated the session on the EWGPWD symposium for the annual conference. The group voted for the Chair for the next term of office of the EWGPWD. Chris Roberts was re-elected Chair and we look forward to his continued leadership of the EWGPWD from October 2022 onwards.