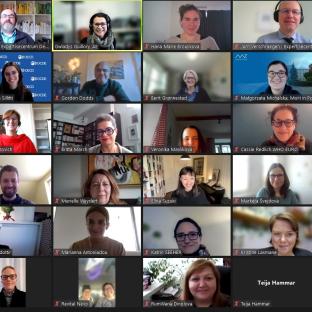 The European Group of Governmental Experts on Dementia has met online, holding its final meeting of 2022, exchanging information and knowledge on the latest developments on dementia policy and practice. The meeting was attended by representatives of 16 countries: Austria, Belgium (Flanders), Bulgaria, Czech Republic, Finland, Germany, Iceland, Israel, Latvia, Luxembourg, Netherlands, Norway, Poland, Slovenia, Switzerland and the United Kingdom (Scotland). Representatives from the European Commission (DG SANTE), the Organisation for Economic Cooperation and Development (OECD) the World Health Organization (WHO) and WHO Europe were also present.

Belgium (Flanders) shared how they had approached the issue brain health, noting that a growing body of evidence (including the Lancet Commission on dementia) suggested that modifiable risk factors could account for up to 40% of dementia diagnoses. An outline was provided of the recent “2voordeprijs1” (two for the price of one) campaign, in which the Flemish Dementia Expert Centre worked with other public health stakeholders, to raise awareness amongst the public about how actions to support good heart health were also beneficial for the brain.

The Czech Republic shared plans for two projects in the country in relation to dementia friendly communities. The “Let’s be dementia friendly” will create and test criteria for dementia-friendly community on city level in the Central Bohemian Region until 2024, whilst a project commencing in 2024 will focus on the implementation of aspects of the country’s national dementia plan through the development of guidelines for health and social services, as well as the scaling-up of the Let's be dementia friendly project. The European Commission provided an update on its Healthier Together initiative which focuses on addressing non-communicable diseases (NCDs) in Member States. During the presentation, the priority areas for the workstreams was highlighted, including those featured in the EU4Health Work Programme 2023. There is a dedicated Joint Action on dementia and other neurological condition, with EUR 4 million of allocated funding, as well as an Action Grant to support stakeholders in work related to the prevention of dementia and neurological diseases, which has been allocated EUR 1 million.

The WHO presented two of its recent publications related to dementia. The first was the launch (in October 2022) of the dementia research blueprint which summarises the current state of dementia research across six themes, identifying existing knowledge gaps, as well as outlining 15 strategic goals with actions and timebound milestones. The second was a position paper on optimising brain health across the life course, a technical complement to the Intersectoral global action plan on epilepsy and other neurological disorders 2022–2031. The position paper provides a conceptual framework for what brain health is and how brain health can be optimized throughout life with actions across a number of different determinants.

The OECD updated the group on recent work examining the challenges and policy options for dementia care across OECD countries. They provided an update on the changing demographic nature of populations, including the numbers of people living with dementia. In addition, it was noted that the pandemic heavily affected people living with dementia, including an increase in isolation and loneliness. However, many lessons from the pandemic were learned including embedding the use of technology and the creation of specific programmes for people with dementia. Additional good practice measures have been identified by the OECD relating to diagnosis, care coordination, support for information caregivers and advanced care planning.