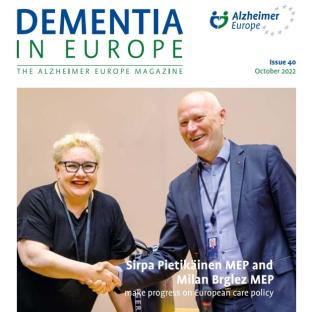 It is with great pleasure that we introduce the 40th edition of our Dementia in Europe magazine, filled with interesting updates on European and national policy developments in the dementia field, as well as European research projects and other research news. We also include interviews with people at the forefront of care, research, policy and advocacy, and articles about some of the issues currently faced by people living with dementia in Europe. This edition has been published both electronically and in paper format, and its launch coincides with the first day of the 32nd Alzheimer Europe Conference, taking place in Bucharest, where all delegates will also receive a copy of the magazine.

The first section looks at some of the key work our organisation has been involved in. The opening article recounts the European Parliament lunch debate held in June 2022, with delegates able to attend in person for the first time since the start of the pandemic. This hybrid session in our series of debates looked at neurological conditions and mental health in EU and WHO Europe programmes, and was hosted by Deidre Clune MEP (Ireland). Many thanks to Ms Clune and her colleagues who were able to participate. After many years working with Alzheimer Europe, our Chairperson, Iva Holmerová, has decided to step down from her position.

The second article in this magazine is an interview in which she discusses her time in the role. In recent decades, a lot of research has been dedicated to gaining a better understanding of brain health and about how to reduce the risk of dementia – in this section we examine two examples of EU-funded projects working in this area. We also speak to the leaders of another EU-funded project in which Alzheimer Europe is partner, AMYPAD, as it draws to a close. A recent session of our popular Alzheimer’s Association Academy series, which focused on dementia as a disability, is the topic of the next article, whilst the final article in this section looks at another important European initiative in which we are involved: Data Saves Lives, led by the European Patients’ Forum, which aims to inform people about the benefits of responsible health data sharing and to improve health data literacy among patient communities. In the Policy Watch section, we hear first about plans for a European Care Strategy, which have recently taken an important step forward. In June, the European Parliament passed a report setting out its priorities for this strategy. Co-rapporteurs, Sirpa Pietikäinen MEP and Milan Brglez MEP tell us more.

The topic of our next article is the “Healthier Together” non-communicable diseases initiative launched by the European Commission, aiming to address the challenges posed by the rising numbers of people living with non-communicable diseases in the EU, including neurological conditions. Pierre Meulien, outgoing Director of the Innovative Health Initiative, then reflects on how research partnerships have transformed neurodegenerative research and the future of research in the field. It has been a pleasure to work with Mr Meulien over the years and Alzheimer Europe wishes him all the best. The European Group of Governmental Experts on Dementia, convened by Alzheimer Europe, held a meeting in June 2022, which is the subject of our next article. At the meeting, a range of dementia policy developments matters were discussed, including how Ukrainians with dementia are being affected by the war, a German paper on the neurological implications of COVID-19 and updates from the World Health Organization (WHO). Staying with the WHO, the final article in our Policy Watch section focuses on the upcoming “dementia research blueprint” which aims to improve coordination of research efforts globally.

The Dementia in Society section opens with two interviews with people assuming leadership positions in the field of dementia in Europe. Ragnheiður Ríkharsðsdóttir started as Chairperson of Alzheimer Iceland in May 2021, while Andy Heffernan took up his position as the CEO of The Alzheimer Society of Ireland this year. Following this, we look at France’s recent ban on driving with dementia, which was met with an outcry. France Alzheimer tells us more, and members of the European Working Group of People with Dementia (EWGPWD) share their views. We also take a look at the phenomenon of “dementia dogs”. Dogs can be a great companions and can also be tremendously helpful to people with disabilities, including people with dementia. Alzheimer Bulgaria and Alzheimer Scotland share initiatives from their respective countries.

Our three remaining articles focus on aspects of research. One highlights the impact COVID-19 has had on people living with, and caring for someone with, dementia. Another stresses that it has now been 20 years with no new Alzheimer’s medications in Europe, while the third examines the role of nutrition in dementia. We hope you enjoy reading it! Our magazine launch is accompanied by the publication of our 2021 Annual Report. Alzheimer Europe is grateful for the support of its corporate sponsors, without whom the Dementia in Europe magazine would not be possible. It is possible to order printed copies of the magazine, via out website, in the resources and publications section and you can also download the 40th edition of our magazine, here (free of charge):