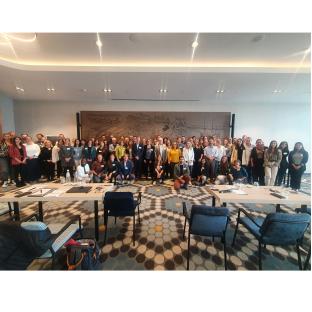 29/11/2022
First consultation of the 2022-2024 EWGPWD: Respectful Communication and the EPND Project
29/11/2022
Want to contribute to efforts of a large pan-European consortium? Apply for a PhD position working on the European project AMYPAD, in Amsterdam
25/11/2022
The I Can Do Pathway - service design in the context of the IDoService project
24/11/2022
EPND launches its Cohort Catalogue preview, featuring over 60 neurodegeneration cohorts with sites in 17 countries across Europe
22/11/2022
EPAD publishes Frontiers in Neurology article, summarising key findings of the study

On 22 and 23 September, more than 80 representatives from the AMYPAD consortium came together in Amsterdam (Netherlands) to attend the final AMYPAD General Assembly Meeting. The 2-day event celebrated the progress and main achievements. Recent results, future planning and activities were the main focus of the meeting. Frederik Barkhof and Gill Farrar, coordinators of the AMYPAD project, kicked off the General Assembly. Following on from the introductory session, the first session was held on the Diagnostic and Patient Management Study (DPMS). With a total of 844 patients randomized on 900 originally planned, the study recruited 245 people with Subjective Cognitive Decline, 342 with Mild Cognitive Impairment and 258 with dementia. All visits and scanning activities have been completed by sites. Primary and secondary endpoints results as well as health-economics analyses were presented. After that, a session was dedicated to the Prognostic and Natural History Study (PNHS).

The study comprises collaboration among sites and parent cohorts in several countries across Europe. In addition to EPAD, there were 9 other Parent Cohorts actively recruiting into AMYPAD. These are: EMIF-AD (60++ and 90+), ALFA+, FACEHBI, FPACK, UCL 2010-412, Microbiota, AMYPAD DPMS (VUMC) and H70. The recruitment was formally ended on 30 April 2022 and the study succeeded in recruiting 1,321 participants. The number of prospective scans collected within AMYPAD PNHS is 1,419 (1,192 baseline and 227 follow-up). The non EPAD Parent Cohorts also shared their historical data and therewith the total number of scans in AMYPAD PNHS is over 2700. Harmonization, integration, and the data-base were also reported. Following on from this presentation, a session around dissemination was held, where Cindy Birck presented the communication activities of the project. After a short break, the screen was given in turn to John Clifford (IHI) who gave feedback on the AMYPAD progress and presented the new IHI initiative. Next, updates were provided on the project management perspective including the final reports and administrative closure.

The first day was brought to a close with a discussion on the AMYPAD post-IMI period including approaches on sustainability, funding opportunities and scientific initiatives. Data governance with DTA, data-access and publication policy post-IMI were also presented. On the second day, the AMYPAD consortium gathered for a scientific exchange and discussion on the technical developments. The WP2 “Tracer delivery, PET scanning and image analysis” team presented main findings and quantifications results from both clinical studies. Next, the floor was given to nine AMYPAD researchers to showcase their respective work and results. Gill Farrar and Frederik Barkhof then drew the meeting to a close, thanking all the participants for their active contribution to the meeting and all AMYPAD members for their enthusiasm and dedication during the last six years! Alzheimer Europe (AE) co-leads the communication and dissemination Work Package of AMYPAD. Cindy Birck, AE Project Officer joined the AMYPAD final General Assembly meeting. The AMYPAD project has received funding from the Innovative Medicines Initiative 2 Joint Undertaking under grant agreement No 115952. The Joint Undertaking receives support from the European Union’s Horizon2020 research and innovation programme and EFPIA. For more information about the project, visit: https://amypad.eu/