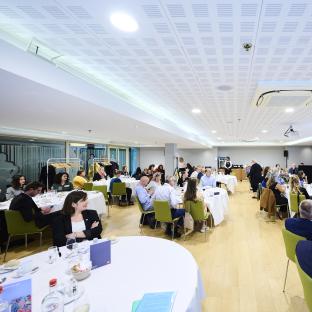 Sirpa Pietikäinen MEP (Finland), Chairperson of the European Alzheimer’s Alliance (EAA) hosted the session and opened by highlighting the opportunities that exist for big data and artificial intelligence to develop more effect treatments for dementia. She noted that considerable amounts of data were generated daily, yet much of it was not analysed or made use of, despite it having potential to improve understanding of the condition. Furthermore, she spoke of the need to balance the opportunities of big data and artificial intelligence, with the need to respect the rights of individuals in relation to their personal data.

In a pre-recorded video message, Deirdre Clune MEP (Ireland) welcomed participants to the meeting and highlighted her membership of the Internal Market and Consumer Protection Committee, noting that she would be keen to hear ideas and suggestions about the steps the EU can take to facilitate the use of data and artificial intelligence to support research into dementia. Furthermore, she highlighted the barriers identified in Alzheimer Europe’s “Data Sharing in Dementia Research – the EU Landscape” report, outlining the role of the EU in addressing issues around infrastructure and regulation.

Petra Ritter, Co-Coordinator of the VirtualBrainCloud project, outlined the aims of the project, explaining they were able to integrate data from different measurements of brains (e.g. imaging data, biobank samples), accounting for differences between individual brains through complex mathematical modelling and using supercomputing capacity, to create “virtual brains”, allowing analysis at the sub-cellular level. This allows researchers to undertake tasks including prediction in the progression of Alzheimer’s disease, as well as examining how different interventions and treatments affect this progression over time; this can can be used in the development of future treatments. However, such research and approaches require significant investment in infrastructure, as well as common data standards across the EU.

Jesper Kjaer, Co-Chair of the Big Data Steering Group (BDSG) in the European Medicines Agency, highlighted some of the previous work of the group on this subject, including a report in 2021 which issued 10 recommendations to improve the use of big data for public health. He set the context of the use of big data as one of supply and demand, noting that implementation require a stepwise approach, with gradual changes required over time. He further explained that real world evidence supported regulators’ decision-making by helping support planning and validity, the understanding of the clinical context, and the investigation of the associations and impacts. A key project ongoing project is the Data Analysis and Real-World Interrogation Network (DARWIN EU), a federated network of data, expertise and services that will support better decision-making throughout the product lifecycle by generating reliable evidence from real world healthcare data.

Andrzej Rys, Director for Health Systems, Medical Products and Innovation in the European Commission, spoke about two key pieces of legislation: the Organization of Health Data (European Health Data Space - EHDS) introduced May 2022 and the Development and Deployment of trustworthy AI systems (the AI Act), introduced in April 2021. He noted that the EHDS set out the manner of collection and registration of health data, as well as the obligations of data holders to make available health data available, e.g. for research or the development of medical devices. He moved on to explained that high-risk AI systems, including AI-based medical devices, were governed by the AI Act, which set out data governance obligations, as well as mandating human oversight, a robust risk management system and transparency and information to users.

Göedze Susuzlu Briggs, Project Coordinator for the DataSavesLives (DSL) initiative, outlined how the multi-stakeholder initiative (led by the European Patients Forum) aims to raise patient and public awareness about the importance of health data and how it is used. She noted that the fundamental principle of the initiative was transparency, ensuring patients were informed and meaningfully involved in processes related to the use of health data. DSL has undertaken a number of activities to spread knowledge and understanding, including the development of a toolki, as well as a training programmes for “ambassadors”, who will be given the information, skills and guidance to take actions to promote the use of health data in their countries. She also shared that work is underway by the Ministry of Health in Germany in this area. During the open discussions, a number of contributions were made, including from members and supporters of the EWGPWD, who shared their poor experience of hospitals in rural areas, as well as their hopes for the development of a cure or new treatment in the near future.

Alzheimer Europe Chairperson Iva Holmerová thanked attendees and speakers for their contributions to the lunch debate. EAA member Tilly Metz MEP (Luxembourg) closed the session, sharing how this subject related to her work as a member of the Environment and Health Committee, as well as shadow rapporteur for the Greens on the EHDS. She thanked the speakers and those who had shared their personal experiences during the debate.

Ms Metz noted the need for coordinated involvement of all stakeholders to drive change in this area, across public, private, research and civil society organisations. She highlighted that where discoveries and outputs were developed from public-private partnerships, the public needed to benefit from the investment made, with good practices and developments translating into improvements in health systems and clinical practice.

The videos of the presentations from the Lunch Debate can be watched here: