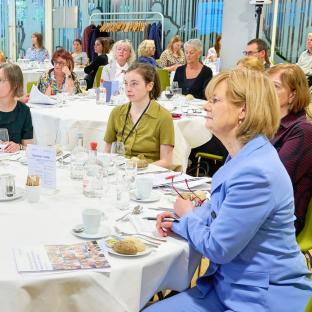 Alzheimer Europe held a Lunch Debate on 14 June 2022, the first in-person event held since February 2020, focused on “Neurological conditions and mental health in EU and WHO Europe programmes”, attended by around 70 people, including national member organisations, civil society representatives, industry partners and policy makers. Deidre Clune MEP (Ireland), Vice-chairperson of the European Alzheimer’s Alliance (EAA) opened the session, welcoming people to the meeting, highlighting its timeliness in light of key programmes at an EU level, across the fields of health and research, as well as activities of the World Health Organization (WHO) and WHO Europe. Ms Clune noted that these developments have the potential to fundamentally change our understanding of, and approach to, neurological conditions.

EAA member Tilly Metz MEP (Luxembourg), spoke about the work of the European Parliament’s Health Committee, including its call for a European Action Plan on Mental Health. In addition, she spoke of the importance of Brain Health across the life course, especially in the domain of prevention.

Ledia Lazeri, Regional Advisor, WHO Europe, provided an overview of the work underway on the European Framework for Action on Mental Health (EFAMH) 2021-2025, across its three areas: Universal health coverage, protection against health emergencies, and mental health across the life course. She also introduced the Pan-European Mental Health Coalition, which operationalises the EFAMH through six work packages, and involves a broad range of stakeholders, including NGOS, Member States, people with lived experience etc. Specifically, work package three “Mental Health and Wellbeing of Older Adults”, will look at implementation of the WHO Global Action Plan on Dementia.

Marianne Takki, Team Leader, European Commission, introduced the EU’s forthcoming “Healthier Together” initiative, which will focus on five Non-Communicable Diseases (cardiovascular, diabetes, respiratory diseases, mental health and neurological conditions, and health determinants). The scope of action will cover areas including knowledge and data, promotion and prevention, screening and early detection, diagnosis and treatment, and quality of life. She noted that the Commission had run an open call to collect good practice examples and would be working with members states to implement these. Example of priority areas included ensuring high quality care, awareness raising and promoting mental wellbeing. The initiative will launch on 22 June 2022.

Catherine Berens, Deputy Head of Unit, Europe Commission, focused on the place of brain research at a European level and the actions of the European Commission in supporting this work. She explained that within the Horizon Europe programme, Pillar One would address the need for more basic research and improved research infrastructures, whilst Pillar 2 has a dedicated health cluster, which will support improved collaboration. Pillar 3 will boost innovation, improving technologies and systems, such as data infrastructures. Finally, a potential future Brain Health partnership was explored, which aims to bring together brain research initiatives under a single umbrella – this is expected to launch in 2025.

Joke Jaarsma, President of the European Federation of Neurology (EFNA), introduced the patient perspective on brain health, highlighting the importance of involving patients in brain health policy. She highlighted challenges and existing barriers, noting that patient participation or engagement often limits the ability of patients to set the agenda for brain health. As such, a Call to Action drafted by Alzheimer Europe, EFNA and GAMIAN-Europe has been issued, demanding that national and EU governing bodies develop and implement policies to ensure early and meaningful engagement to support involvement of patients across all sectors. Specifically, this should include well-defined, transparent processes that are systematically embedded and ingrained in workstreams.

Alzheimer Europe Chairperson Iva Holmerová closed the session by thanking attendees and speakers for their contributions to the Lunch Debate. The next European Parliament Workshop will take place on 27 September 2022. The videos of the presentations from the Lunch Debate can be found at: https://www.youtube.com/playlist?list=PLO-PgQHI1WQW8Y1Siogzhjo_AJYTXGWM9