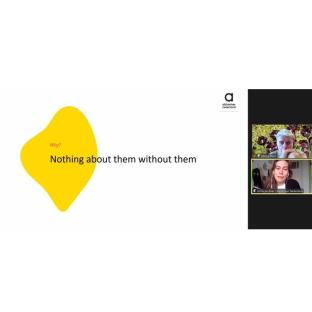 On 27 September, various representatives from Alzheimer Europe's member organisations and staff came together to learn about the current state of play when it comes to policies & activities around dementia and employment on a national as well as EU level. Alzheimer Europe's Policy Officer, Owen Miller, opened the Alzheimer's Association Academy welcoming in-person as well as online attendees of the hybrid workshop aimed at promoting exchange between member organisations and to enable the uptake of best practice examples, amongst others.

The first presentation was given by Owen Miller. He spoke about the upcoming Alzheimer Europe 2022 Yearbook, entitled "Employment and Social Protections for people living with dementia and their carers" that will be published at the end of 2022. His presentation was entitled "Employment and social security rights for people with dementia – some findings of the Alzheimer Europe survey". Owen started introducing the European and international policy context, the overarching frameworks and conventions related to the field, including the United Nations Convention on the Rights of Persons with Disabilities (UNCRPD) to which the UN Committee on the Rights of Persons with Disabilities released its new General Comment 8, on the right to work and employment (article 27), as well as the Charter on Fundamental Rights and the European Pillar of Social Rights. Some of the national findings from the survey included that there are few examples within national dementia strategies in relation to employment or social protections, noting that a number of countries (Czech Republic, Ireland, Netherlands) referenced the matter without including specific commitments or activities to resolve it. Conversely; Germany, Greece, Malta, Spain and Slovenia (tentatively), did have measures in their strategies. France was notable in that its neurodegenerative disease plan did have measures for other conditions, but not for dementia. Some countries highlighted other plans or strategies which focus on people with disabilities, or people who were not active in the labour market, which included measures relevant for people with dementia or their carers (Czech Republic, Estonia, Finland, France, Germany, Malta as well as Portugal). The next part of his presentation revolved around legislation, in which he highlighted that all respondents (except one), had laws relating to the protection of persons in employment and the prevention of discrimination for people living with a disability or with a carer. Another aspect he highlighted, was that it is incredibly difficult to draw meaningful comparisons between countries, due to the different models, payments, criteria. Nevertheless, there are common complaints with regards to social protection including; bureaucratic systems/complicated applications, insufficiency of benefits, restrictive eligibility criteria (age, hours worked etc.) amongst others. He closed his presentation noting that the Yearbook will also include examples and experiences of people living with dementia/carers/national members as well as good practice examples.

The next presentation was provided by Lorène Gilly from France Alzheimer. It focussed on supporting carers of people with dementia in employment – the White Paper of France Alzheimer. Lorène started her presentation by giving some context to the situation of people living in France where an estimated 11 million provide support to a person living with a disability or in loss of autonomy, of which over half are women and increasingly (66%) pursue a professional activity. Given the high amount of unmet needs for these people, France Alzheimer issued a white book for supporters following a profession in 2016, this publication was updated in 2018, with the aim to involve the mobilization of public authorities, civil society and economic players around four pillars:

The final part of Lorènes presentation focussed on that legislative progress around paid leave. In 2018, at the initiative of MP’s, the provision of leave days between employees was extended to carers of people with a loss of autonomy, no matter the cause. In September 2020, the daily caregiver allowance compensated up to 66 days the caregiver leave. It is “for anyone residing in France who reduces or ceases their professional activity and wishes to take care of a loved one with a disability or particularly serious loss of autonomy. Paid by family allowance funds, or agricultural social mutuality funds for people covered by the agricultural scheme, it is granted under certain conditions.” The latest update from January 2022 was a decree that revaluates the allowance and lifts the condition of the level of dependency or disability of the person cared for.

The following presenter was Gavin Terry from the Alzheimer’s Society, UK. He spoke about supporting people with dementia in employment and the situation in the United Kingdom. He started his presentation by explaining that they also developed a support guide for people who work as well as provide informal care. He then explained that the Equality Act 2010 is aimed to protect people in England and Wales from discrimination and being unfairly treated at work, including people who have been diagnosed with dementia. In his presentation, Gavin emphasised that under the act, employers must only make adjustments when they know about the diagnosis and that this comes with the side-issue that some people may not want their employer to know about their diagnosis (about which they only have to tell their employer in case work safety could be affected). Furthermore, he explained that drivers will need to tell their insurance company as well as the safety authority about their diagnosis. He then stressed that having a conversation with the employer is really important, which they stress in their brochure. A problem they have encountered is that people have been fired as a consequence of their diagnosis. He stressed that if the employer hasn’t adjusted the workspace, affected people can challenge this action if the employer didn’t do what he should have (in reference to the Equality Act 2010). The association also helps with this on their help line. From the experiences they've made during conversations with affected people on their helpline, some feel relieved to leave work others don’t – they stress that these people didn’t fail. Making an informed decision about leaving work as well as legal advice on life insurance etc. are important.

The last presentation was provided by Marco Blom and Anne de Boer from Alzheimer Nederland. It revolved about meaningful volunteering opportunities for people with dementia through DemenTalent. Through this initiative, the association helps people to find volunteering opportunities in their communities. Anne de Boer went on to provide some real-life examples as part of her presentation. The first volunteering example she introduced was Lotte, who used to work as gardener. She was diagnosed with dementia and needed a bit of guidance to help in a local garden. This was a bit difficult for her as she needed to be allocated to clear tasks, once these were explicit she enjoyed working. What made it great for her, was that she could see the results and that she did something that lasted. The next volunteering example was about Peter. He was also retired but wanted to use his talent. As he used to work in restaurants and found great enjoyment working in a meeting centre for people with dementia and their carers. This was extremely helpful for the manager but also enjoyable to Peter as he likes the social interaction but wants to be host rather than guest. The third example was about Ed who is volunteering at a school. As expert by experience he shared how it is to live with dementia to students. Before his diagnosis, he used to be scared to talk before in front of big groups and now he enjoys this as he made great experiences. The last example was about Bob. He also has dementia and lives close to a Kindergarden with a playground. At this playground, he thought there could be improvements and make use of his talent to make it bigger and nicer for kids. They found another man who was eager to help in this and together they did a makeover as volunteers. Conclusions about their initiative were that people with dementia showed fewer neuropsychiatric symptoms (anxiety, apathy, depression & agitation), informal caregivers felt much less emotionally burdened and that DemenTalent is cost effective. Anne noted that the "Restaurant that makes mistakes" which will go into a third season in two weeks and DementTalent have a lot in common, It is about a restaurant where people living with dementia work and shows show people that people with dementia are capable of a lot. And that they can still contribute to society. And it shows the variety of talents people with dementia have. The difference is mainly the fact that people in the series work together with other people with dementia. At dementalent that is not neccesary. There was ample time for lively discussion and questions to the speakers after each presentation. At the end, Jean Georges closed the session thanking all participants and speakers.