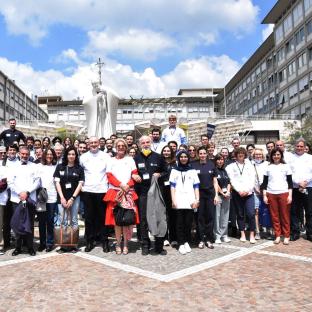 On 4-5 May, the H2020-funded AI-Mind project held its general assembly meeting as a hybrid event (online and in Rome, Italy). The project kicked off in March 2021 and aims to facilitate a paradigm shift in clinical practice. AI-Mind will create intelligent digital tools for screening of brain connectivity and dementia risk estimation in people affected by mild cognitive impairment. The meeting was hosted by two project partners, the Università Cattolica del Sacro Cuore (UCSC) and the Istituto di Ricovero e Cura a Carattere Scientifico San Raffaele Roma (IRCCS). Paolo Maria Rossini (IRCCS) and Americo Cicchetti (UCSC) kicked off the meeting by welcoming more than 70 members from the AI-Mind consortium counting 15 partners. The event was an opportunity for some of the project members to meet each other in person for the first time. This was especially important as at the end of February, AI-Mind closed its first year of duration. The welcome introduction was followed up by a “state of the play” from the project coordinator, Ira Haraldsen (Oslo University Hospital, OUS), whose talk focused on the AI-Mind progress. Then, the first impressions from the AI-Mind clinical study were shared with delegates. After the first session dedicated to AI-Mind’s “state of the play”, project partners attended two scientific lectures on the definitions of Mild Cognitive Impairment by Frank Jessen (University of Cologne) and Michael Wagner (University Hospital Bonn). Next, several sessions dedicated to the different work packages were held to discuss progress, ongoing activities, challenges and next steps to develop artificial intelligence(AI)-based tools for dementia prediction.

Dianne Gove gave an update on Task 1.5 led by AE, including the rapid review, the Public Involvement work/stakeholder consultation and the planned communication strategy for ethical communication of AI-based dementia risk prediction. The first part of the second day continued with meaningful discussions on the AI-Mind study, effective communication and management aspects. This was followed by a talk on the innovation management by Jeanette Muller (accelopment Schweiz AG, accelCH). Next, the floor was given to Mathias Toft and Ainar Drews (OUS) who talked respectively about the biomarkers dynamics in pre-symptomatic Alzheimer’s disease and the limitations of artificial intelligence. Ira and Paolo then drew the meeting to a close, thanking all the participants for their active contribution to the meeting. Director of Projects Dianne Gove and Project Officer Cindy Birck represented Alzheimer Europe at the meeting in Rome. Project Officers Ana Diaz, Christophe Bintener and Angela Bradshaw joined online. The full summary of the 4th AI-Mind General Assembly is available on the project website: https://www.ai-mind.eu/blog/closing-the-first-year-with-in-person-meeting-4th-general-assembly/