Dementia in Europe Yearbook 2013: National policies relating to the care and support of people with dementia and their carers, as well as the prevalence of dementia 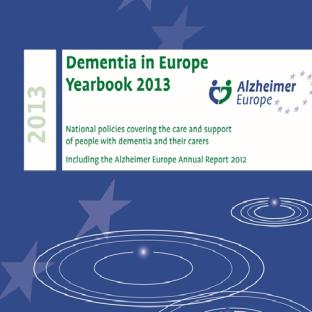 The Dementia in Europe Yearbook 2013 focuses on national policies and provisions relating to the care and support (but not medical treatment) of people with dementia and carers in Europe. This covers relevant provisions contained in national dementia strategies as well as other principles, plans guidelines and administrative practices devised or communicated by national governments (or in some cases by regional governments or other official bodies) which describe the actions that will be taken by the relevant actors within society in relation to the care and support of people with dementia.

The report covers provisions in the EU Member States as well as in Norway, Switzerland and Turkey. For most countries, there is a short report on the national provisions related to care and support as well as details of the services and support provided by national Alzheimer associations and a calculation of the prevalence of dementia for men and women in different age groups.