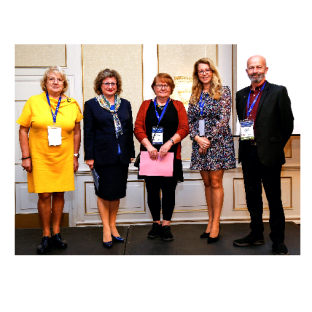 The 32nd Alzheimer Europe Conference (#32AEC) “Building bridges” was formally opened on 17 October 2022, at the JW Marriot Hotel conference centre in Bucharest, Romania. The conference was held as a hybrid event for the first time ever, with delegates and presenters able to join either on site or online, thus making it as accessible, inclusive and interactive as possible. 544 participants from 42 countries attended the conference, which took place over three days, ending on 19 October 2022. On the agenda were over 250 presenters (187 oral presentations, 38 quick oral presentations and 63 poster presentations), who shared their research, knowledge and experience in an atmosphere of true collaboration and solidarity.

Iva Holmerová, outgoing Chairperson of Alzheimer Europe, opened the conference. She extended a special welcome to the 22 people with dementia among the delegates, as well as to their supporters. Echoing the theme of the conference, she said, “we hope to ‘build bridges’ across European borders, to ensure that good practices in dementia care and innovations in diagnosis and treatment are made equally available across the whole European continent.” As our countries are slowly emerging and recovering from the impact of the COVID-19 pandemic, our continent has unfortunately seen the return of war. However disheartening, she stressed that she was encouraged by neighbouring countries welcoming Ukrainians fleeing the conflict and by organisations doing their best to support refugees with dementia and their carers. She highlighted the vital work of the European Working Group of People with Dementia (EWGPWD), noting the 10th anniversary of the group this year, singled out the fantastic collaboration that Alzheimer Europe has developed with the INTERDEM network, and expressed the organisation’s gratitude to its corporate conference sponsors, Biogen, Lilly, PAVE and Roche. In closing, she informed delegates of her decision to step down from the position of Chairperson of Alzheimer Europe. “The organisation has grown a lot in my time here and I am very proud of our achievements, not least of which is our success in truly giving a voice to and integrating people with dementia in all our work”, she stated. She also warmly congratulated her successor, Rosário Zincke dos Reis from Portugal, who was elected as her successor, during Alzheimer Europe's Annual Meeting, just prior to the conference. “Following these opening words, delegates were also welcomed by Diana-Loreta Păun, Presidential Advisor, Romania, who noted that we are currently in the UN Decade of Healthy Ageing, but that dementia is a leading cause of death as well as of disability. She stressed the importance of working together to improve the delivery of care for people with dementia.

Chris Roberts was next up to the lectern, addressing delegates in his capacity as a person living with dementia and as the Chairperson of the EWGPWD. He urged those present not to make assumptions about him and other people with dementia. “Speak to me, ask me, and understand me! I still have a voice and opinions of my own”, he emphasised. “I am still a person even though I am living with dementia”. He also highlighted the importance of working together and of involving people with dementia in all our work, calling to mind the slogan “Nothing about us without ALL of us!” He continued by giving thanks to everyone present, for the assistance, support, services, information, research and understanding afforded to people living with these “cruel and life changing brain diseases”.

Marjolein de Vugt spoke on behalf of INTERDEM (Early detection and timely INTERvention in DEMentia). "Building strong bridges between research and practice is key to sustainable implementation of innovations, and there is much to gain for both researchers and society”, she said. She also stressed that “strengthening intergenerational connections in dementia research and society will help to build a better future for people with dementia".

Cătălina Tudose, Chairperson of Societatea Română Alzheimer welcomed everyone warmly to the conference and to Romania. She also thanked Alzheimer Europe for the guidance and support over the years since her association joined, in 1994. “Many things have changed throughout these years”, she said, but one of the things she wanted to draw particular attention to, in terms of evolution, was that she felt Alzheimer Europe has been able to provide a “unique structure” and an example, due to its involvement of people with dementia in all of its work.

The opening ceremony was followed by a keynote presentation delivered by Alexander Kurz, Klinikum rechts der Isar, Technical University of Munich, Germany, who began by pointing out that many national health and social systems in South Eastern Europe are not prepared to meet the challenge of the rapidly rising number of people living with dementia which is predicted over the coming decades. He also noted their limited ability to provide a good standard of care, due to a lack of public awareness of dementia, outward migration of skilled health workers, insufficient knowledge and cooperation among professional groups, and weakening traditional familial support. He said, however, that European collaboration could make significant contributions to improving dementia care in the region, and listed several examples of EU-supported collaborative projects. “Transnational collaboration can help to overcome gaps and barriers in dementia by sharing a person-centred model of care, promoting comprehensive and proactive forms of management, developing novel tools and services, taking steps to put dementia higher on political agendas, and advocating for national dementia strategies and plans”, he said. He also pointed out, however, that while there is a wealth of excellent ongoing collaborative projects, these projects do not, in themselves, automatically improve dementia care. Indeed, most do not survive the end of funding, he stressed, and insisted that “more attention needs to be given to knowledge translation from projects to practice, to dissemination, implementation and sustainability. This requires careful planning, smart delivery and intensive networking.” Bridges need to be built from projects to peers, policy makers and other stakeholders, he concluded.

The second day of the conference had two plenary sessions, one focusing on the impact of the COVID-19 pandemic, chaired by Alzheimer Europe Vice-Chairperson Charles Scerri, and one on brain health and prevention, chaired by Marjolein de Vugt from Alzheimer Center Limburg, Netherlands. The plenary session on “Moving beyond the COVID-19 pandemic” opened with a presentation by Bernd Heise, Vice-Chairperson of the European Working Group of People with Dementia (EWGPWD), who shared his lived experience of adapting to the COVID-19 pandemic as a person with dementia. Clarissa Giebel from the University of Liverpool highlighted the extent to which carers have been neglected, not only during the pandemic but also before it and since. The last speaker, Brigitte Juraszovich, Senior Health Expert at the Austrian Public Health Institute, spoke about implementing the Austrian dementia strategy during the COVID-19 pandemic.

The plenary session on brain health and prevention, began with a presentation on “Increasing awareness of dementia prevention through public campaigns”, delivered by Jan Steyaert, Scientific Officer at the Flemish centre of expertise on dementia and Professor in the department of social sciences at the University of Antwerp, Belgium. He explained that research over the past decade has clearly shown that there are modifiable risk factors for dementia and that it is possible to slow down the future increase of dementia by focusing on these. In addition to developing good dementia care and looking for pharmaceutical solutions, it is also clear that it is necessary to work on primary prevention, he said. Primary prevention of dementia was also the focus of the next speaker, Edo Richard from the Radboud University Medical Centre, Nijmegen, Netherlands.

The final presentation in this plenary session was given by Wiesje van der Flier, Scientific Director of the Alzheimer Center Amsterdam, who emphasised that risk and probabilities can be difficult for patients to understand, and equally difficult for clinicians to explain. Yet, she noted, patients increasingly want information, so clinicians need tools and training to support them in communicating risk. She also noted the importance of learning from other fields that have experience with communicating risk and the inherent uncertainty that comes with it, such as oncology or cardiology.

The agenda on the third and final day focused on European collaboration and on making dementia a care, policy and research priority. Plenary four comprised four presentations revolving around the theme “Building bridges across Europe”. The session was chaired by Iva Holmerová and started with a presentation by Cătălina Tudose, President of Societatea Română Alzheimer (Romanian Alzheimer Society), who discussed “Progress of Dementia Care System in Romania as a Consequence of European Integration and Support”. Up next, Iryna Shevchenko, Founder and Director of Nezabutni charitable foundation, Ukraine, spoke about the impact that the ongoing war in her country is having on people with dementia and their families. She gave details of the incredible ongoing efforts that her organisation, other organisations, and individuals are making, to try to ensure that people have access to medicine, to information, and to online care, at a time when face-to-face care is not possible.

Adrianna Senczyszyn from Wroclaw Medical University, Poland, took the floor next, to share her presentation with delegates, which was called “Between frozen dementia care in Ukraine and building bridges in Europe: the experience of Poland”. Cassie Redlich, Technical Officer, Mental Health Flagship, WHO Regional Office for Europe (Denmark) was the final speaker in this plenary, and discussed “Opportunities for improving dementia care and support through the Pan-European Mental Health Coalition”. The Coalition mobilises key stakeholders – including those living with dementia and their carers – to “drive momentum for reducing stigma and ageism, improving care and increasing investment”.

The closing ceremony of the conference included the announcement of the winners of the Anti-Stigma Award. Congratulations to the winning initiative, "Adoptieproject: Jong adopteert Oud" and to the other two short-listed entries "Non ti scordare di volermi bene" and "Changing perceptions of dementia in the Punjabi community", which placed second and third, respectively. The trophy and prizes were awarded by Iva Holmerová. She also announced the winners of the poster competition, which are awarded each year by the Alzheimer Europe Foundation.

This year, the top two virtual poster presentations, as voted by conference participants, were:

The top two posters at the conference venue in Bucharest, as voted by conference participants, were:

The winners will be awarded EUR 750 each and the runners-up EUR 250 each. Closing comments were made by Cătălina Tudose, President, Societatea Română Alzheimer and Rosário Zincke dos Reis, Chairperson-elect, Alzheimer Europe, who then invited Katariina Suomu, Executive Director of Muistiliitto, the Alzheimer Society of Finland, who welcomed attendees to the 33rd Alzheimer Europe Conference in Helsinki, in October 2023.

Alzheimer Europe is trying to be as socially responsible as possible and is delighted to have worked with volunteer movement "Serve the City" in Bucharest, to ensure no food went to waste. They re-distributed unused food from our coffee breaks and lunches to those in need, across the city.