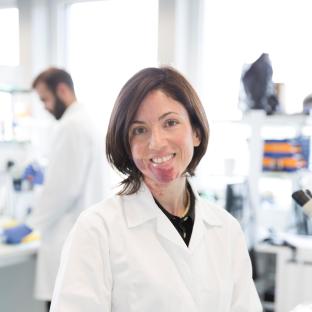 Maria Teresa is a neuroimmunologist and science advocate with over 10-year international experience in the field of Alzheimer’s disease, and a unique expertise on sex and gender medicine.

After a master in Pharmaceutical Chemistry in 2005 (University of Cagliari, Italy) and a stage at the Center of Excellence for Drug Discovery of GlaxoSmith&Kline (Harlow, England), she obtained a PhD in Pharmacology and Therapeutics at McGill University (Montreal, Canada) in 2011 with a thesis on the role of inflammation in Alzheimer’s Disease with dr Claudio Cuello.

In 2011 she moved back to Europe and joined the Nitsch’s lab (University of Zurich, Switzerland) as postdoc and group leader, to further study the role of the immune system in Alzheimer’s. During this time, she performed deep immunophenotyping of animal models of Alzheimer’s and established in the lab the first protocols for multidimensional characterization of human blood cells using mass cytometry.

Maria Teresa currently serves as the Chief Scientific Officer of the organization; she is also an external teacher at the Medical University of Vienna. Austria. As WBP Chief Scientific Officer she is a sought-after speaker, and gives regular talks, lectures and presentation, both at scientific and lay public meetings, including CME courses. She is a Faculty member of the Course for Advance studies (CAS) on gender medicine at University of Zurich (Switzerland) and member of the Advisory Board of the Mary Horrigan Connors Center for Women's Health and Gender Biology at the Women’s and Brigham’s Hospital in Boston. She is the editor of the book ‘Sex differences in Alzheimer’s Disease’ published by Elsevier. In 2021, with Dr Antonella Santuccione Chadha, co-founder and CEO of WBP, she co-authored the book ‘Una bambina senza testa’ (Edizioni Mondo Nuovo), a semi-fictional book dedicated to brain and mental diseases.