The 29th Alzheimer Europe Conference (#29AEC) “Making valuable connections” was held in The Hague on 23-35 October 2019. 954 participants from 46 countries attended the conference, which boasted 287 speakers and 241 poster presentations, sharing their research, projects and experiences in an atmosphere of collaboration.

Iva Holmerová, Chairperson of Alzheimer Europe, opened the conference, extending a special welcome to the 36 people with dementia who were among the delegates, as well as their supporters. Following Iva Holmerová’s opening speech, delegates were also welcomed by Gerjoke Wilmink, Executive Director of Alzheimer Nederland; Myrra Vernooij-Dassen, Chairperson of INTERDEM (Early detection and timely INTERvention in DEMentia); Helen Rochford-Brennan, Chairperson of the European Working Group of People with Dementia (EWGPWD); Kavita Parbhudayal, Deputy Mayor of The Hague; and Theo van Uum, Director of Long-term Care at the Dutch Ministry of Health, Welfare and Sport. 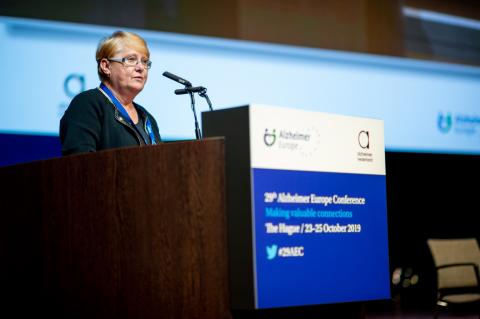 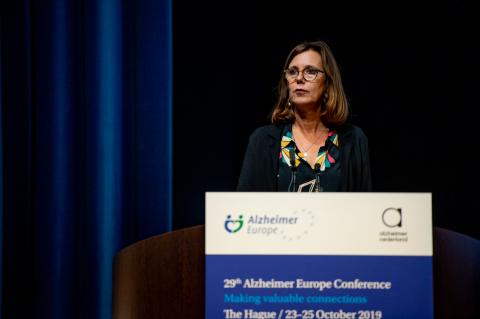 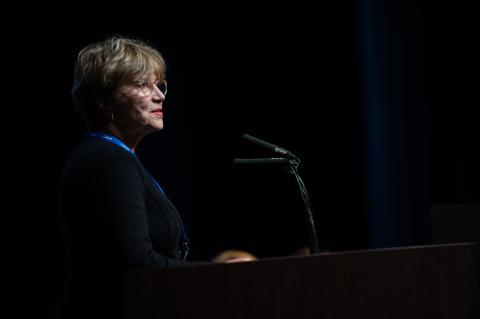 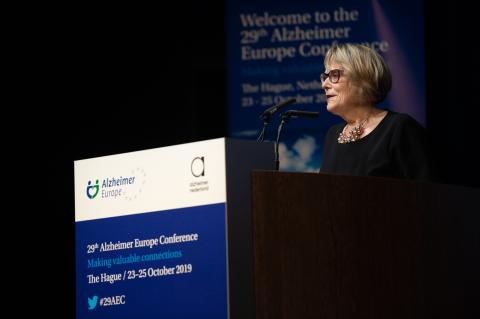 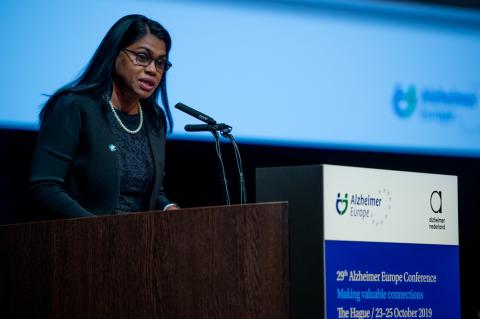 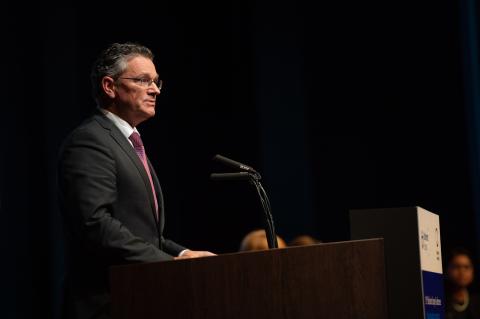 Gerjoke Wilmink referred to Alzheimer Nederland’s 35th anniversary, and drew delegates’ attention to the organisation’s role as one of the co-founders of Alzheimer Europe and as hosts and co-organisers of the 1st Alzheimer Europe Conference, in Friesland. She also mentioned Alzheimer Nederland’s national “Dementia Event”, held earlier the same day. Myrra Vernooij-Dassen emphasised the importance of taking responsibility to move the field forward, mentioning three ways in which this could be done: developing more individualised interventions, based on a better understanding of ways in which people are affected by dementia, and of the mechanisms of change underlying effective interventions; developing models of co-production in dementia research and in implementation of findings; and mentoring and educating the next generation of dementia care researchers. Next, Helen Rochford-Brennan addressed delegates from her perspective as a person living with dementia., highlighting the value of the voice of people living with dementia, in particular drawing attention to the benefits of patient and public involvement (PPI). She also stressed that researchers need to branch out beyond their current pool of contacts, to move things forward. Kavita Parbhudayal, Deputy Mayor of The Hague, responsible for Care, Youth and Public Health took the floor next, extending a warm welcome to delegates in The Hague and following her, Theo van Uum assured delegates that dementia, in all of its aspects, is a priority for the Dutch Government. 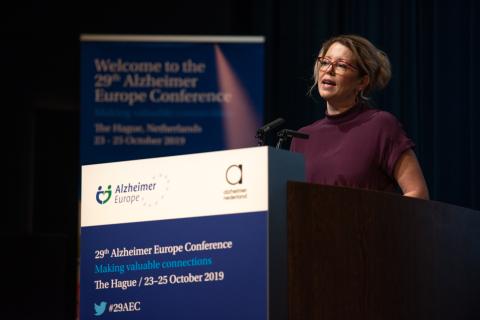 The first keynote lecture was delivered by Marjolein de Vugt, Professor of Psychosocial Innovations in dementia at Maastricht University Medical Center+. In her presentation on “eHealth as effective support for family carers”, she emphasised the need for a more balanced view of dementia and its impact. While the dominant view on dementia places much emphasis on suffering and loss and while there is no cure for the disease, it does not mean that people with dementia are without hope, or lost. “There can certainly be room for positive experiences and a meaningful life despite the illness”, she said, and eHealth can contribute to this. It enables a more affordable and personalised delivery of care by increasing socio-economic inclusion, patient empowerment, and access to services and information in daily life. She stressed that the main hindrance to the use of eHealth interventions in daily dementia practice is a lack of research into its implementation. This, coupled with a number of implementation barriers, needs to be overcome in order to move forwards.

On 24 October, the first plenary session on “Diagnosis and post-diagnostic support” was chaired by Gerjoke Wilmink (Netherlands) and opened with a presentation on “Improving the diagnosis, post-diagnostic support, care and inclusion of people with dementia: the findings of the 2nd European Joint Action on Dementia”, given by Geoff Huggins, the Director of the NES Digital Service. The second speaker was Wiesje van der Flier, head of clinical research at the Alzheimer Center Amsterdam at Amsterdam UMC, presenting “Research leading to better diagnosis and care in memory clinics – findings from the ABIDE project” (ABIDE = Alzheimer's Biomarkers In Daily practice). Henry Brodaty, Professor of Ageing and Mental Health, at the University of New South Wales (UNSW Sydney) was last to take the floor in this session, delivering a presentation on “After the diagnosis… what next? Post-diagnostic support for people with dementia and their families”. The first plenary ended with an award ceremony. ZonMw - The Netherlands Organisation for Health Research and Development, gave an award to the ABIDE project. The award was presented to Wiesje van der Flier, principal investigator, by Henk Smid, Director of ZonMw and Saskia Danen, patient representative from Alzheimer Nederland. The project was funded by ZonMw and Alzheimer Nederland. A short video about the project was also shown. 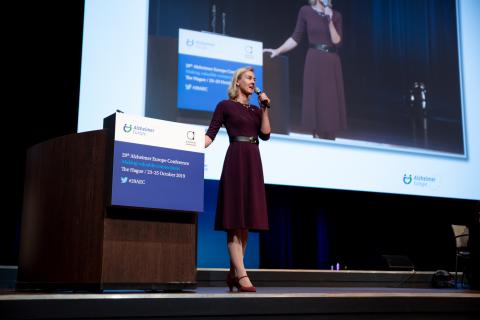 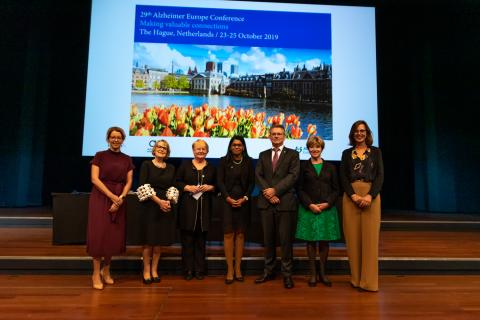 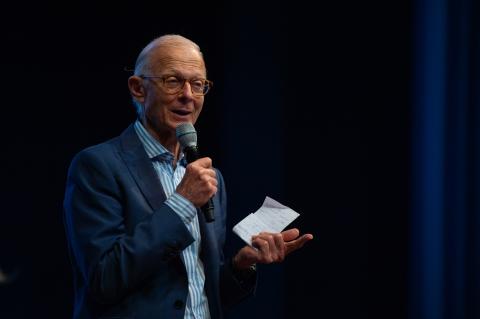 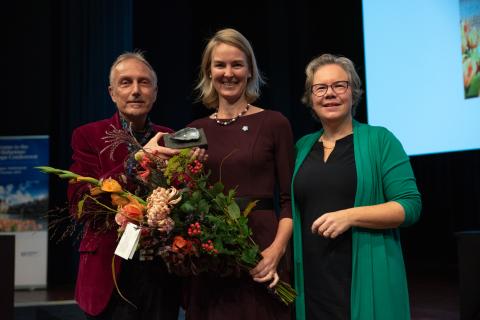 The second plenary session, which took place later the same day, focused on “Technology and e-health” and was chaired by Charles Scerri (Malta). The opening presentation, by Wijnand IJsselsteijn, Professor of Cognition and Affect in Human-Technology Interaction at Eindhoven University of Technology, looked at “Warm technology and co-design with people with dementia”. Dag Aarsland took the floor next, for his presentation “What role for ‘wearables’ in the detection of people at risk of dementia and in monitoring disease progression?”. Dag Aarsland is Head of Department of Old Age Psychiatry at the Institute of Psychiatry, Psychology and Neuroscience at King’s College London. His presentation included  an introduction to the RADAR-AD project (Remote Assessment of Disease And Relapse - Alzheimer’s Disease), in which Alzheimer Europe is a partner. Marco Blom, Scientific Director and Head of National Services at Alzheimer Nederland, was up next. He gave a presentation on “Identifying the needs and views of carers of people with dementia: the online platform of Alzheimer Nederland”. Emma Ferguson-Coleman, who is a Deaf research associate within the Social Research with Deaf People (SORD) group at the University of Manchester, closed the second plenary session, giving delegates some insight into “Navigating everyday challenges of life-story work with Deaf sign language users with dementia”. 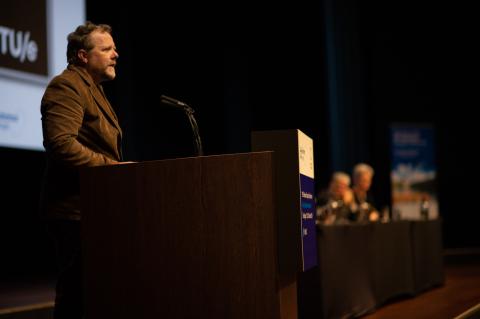 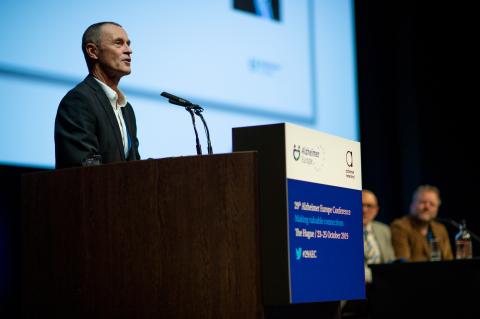 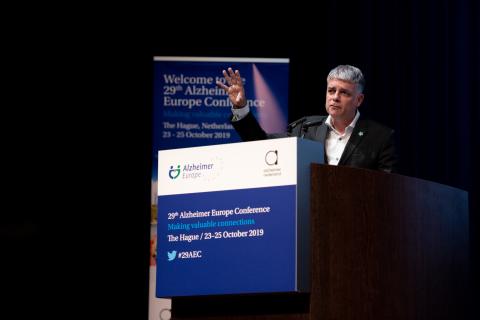 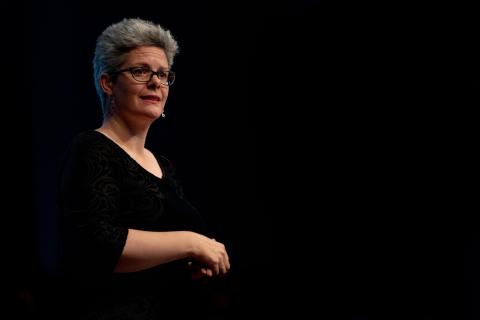 The third plenary session took place on 24 October. “Making our societies more dementia-inclusive” was chaired by Jim Pearson (Scotland, UK) and opened with a presentation by Bernd Heise, a member of the EWGPWD, who shared his expectations from dementia-inclusive communities, with the audience. Mohammed Akhlak Rauf, Founder & Director of Meri Yaadain CiC, used his presentation to discuss “Embedding intercultural care to support dementia care amongst minority ethnic communities”. Julie Meerveld, Manager of Regional Support and Advocacy at Alzheimer Nederland, presented “The Dutch National Programme for a dementia-inclusive society – a collaboration involving national and local authorities, associations and companies”. Elina Suzuki, an Advisor to the Director of Employment, Labour and Social Affairs at the Organisation for Economic Co-operation and Development (OECD), was the final speaker at this plenary session. She presented on the state of dementia care and dementia-friendly initiatives across OECD countries. 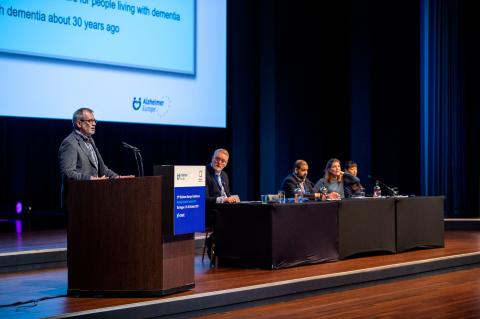 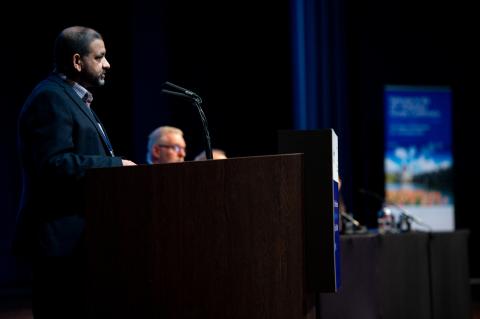 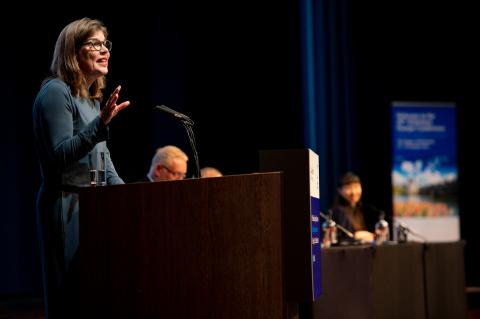 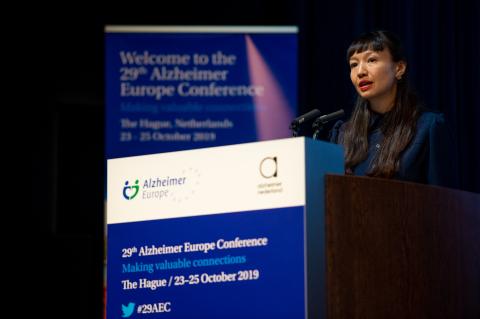 The last plenary session posed the question “How can research lead to better prevention?” and was chaired by Marco Blom (Netherlands). It began with a presentation on “Multidomain lifestyle interventions to prevent cognitive impairment and dementia: From FINGER to World-Wide FINGERS”, given by Tiia Ngandu, Research Manager and leader of the Dementia Prevention group at the Finnish Institute for Health and Welfare in Helsinki. Next, Meike Vernooij, Professor of Population Imaging at the Erasmus University Medical Center, discussed “The role of imaging in epidemiological studies: findings of the Rotterdam Scan Study”. Sebastian Köhler, Associated Professor at the School for Mental Health and Neuroscience at Maastricht University and Senior Researcher at the Alzheimer Centrum Limburg at Maastricht UMC+ used his session to stress the importance of immediate action, where dementia prevention is concerned. 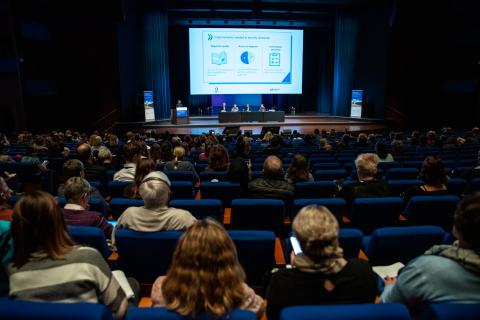 The second keynote presentation was delivered by Debby Gerritsen, Professor of Wellbeing among Frail Elderly People and People with Chronic Illnesses in Long-term Care, at the Department of Primary and Community care of the Radboud University Medical Center in Nijmegen. Her presentation, “Empowerment and wellbeing among people with dementia”, emphasised that the healthcare sector and healthcare professionals need to focus more on people’s strengths and their need to feel useful, rather than on what they are no longer capable of. She also highlighted the importance of specifying what empowerment means and includes for people with dementia, and how it can be shaped in the relationship between the individual and the people in their environment.

The three-day conference also featured 32 parallel sessions on diverse topics for delegates to choose from.

The three-day conference was formally closed by Iva Holmerová and Gerjoke Wilmink, who thanked speakers and poster presenters for sharing their research, projects and experiences. Iva Holmerová thanked Alzheimer Nederland for co-hosting the 29th Alzheimer Europe Conference and said a special thank you to the various sponsors of the conference: 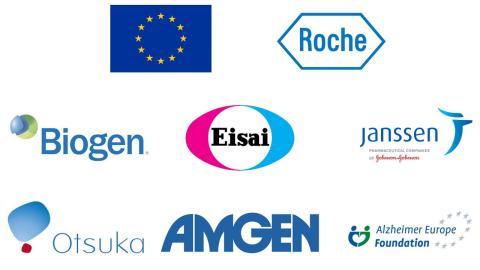