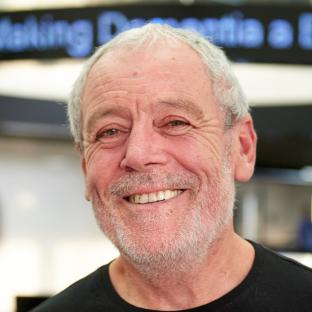 Tomaž Gržinič was born in Ljubljana in 1952. His education was in graphic and art editing and most of the life he has been an employee at a famous Slovenian graphic company. His occupations included graphic preparation for printing and editing or designing articles for professional magazines, newspapers or books, both at national and international level. He is married and has 2 children, a daughter and a son.

He was diagnosed with Alzheimer's dementia in 2016. Since the diagnosis, his social network has remained the same as it was before. Support from his closest family and friends plays a major role in his everyday life.

Tomaž is retired, but is still very active. In his spare time, he enjoys reading newspapers, watching sport, hiking and gardening at his weekend house, near Ljubljana. He occasionally works for the graphic company and helps with editing and designing articles for magazines. He is a devoted husband and father and could not imagine his life without sports and spending time with friends. He also has a special interest in sailing and in summer, he usually spends two weeks sailing in the Mediterranean with friends. Tomaž is funny, sociable, open-minded and positive most of the time. Even small orientation problems do not significantly affect his everyday functioning.

Tomaž Gržinič joined the Slovenian Working Group for People with Dementia in 2017 and was also elected President of the group. In Autumn 2017, he was nominated by Spominčica - Alzheimer Slovenia to join the EWGPWD, where he is happy to share his experiences of how to live well with dementia.

He was nominated by Alzheimer Slovenia.