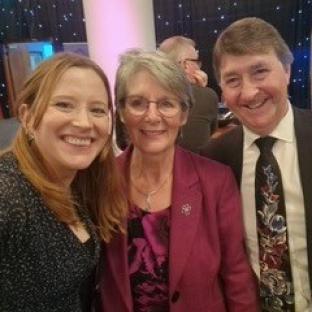 Hello!  My name is Barry Northedge, I’m 65 years young and live in the Highlands of Scotland about a mile away from the shores of Loch Ness (don’t let anyone tell you that the Loch Ness monster doesn’t exist..), it is a beautiful part of the world.

My wife, Margaret was diagnosed with early onset Alzheimer’s disease about eight years ago when she was 55 years old, our life changed. She had no choice but to give up a job that she enjoyed and felt ‘lost’ but she has since become an active member of the Scottish Dementia Working Group campaigning on behalf of the thousands of people who are living with dementia. She remains a positive and active role model who, I believe, is an inspiration.

I spent a career working in all forms of education. I was a teacher, youth worker, trained long term unemployed adults, managed Outdoor Education in Highland and, latterly, managed school improvement, similar to a schools inspector. I loved every phase of my career but retired just over three years ago to support Margaret.  Since retirement we have been actively involved in dementia research and training, we have both just been elected to the Board of Trustees for Alzheimer Scotland and now I am particularly fortunate to be able to join the EDCWG.

I’m looking forward to working with you all to promote a positive approach to living and working with dementia.